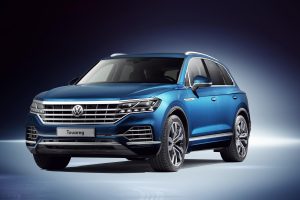 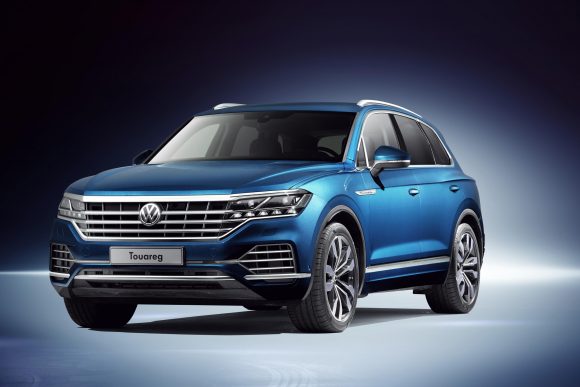 The German manufacturer’s flagship sport utility vehicle is now in its third generation and benefits from a range of new technologies and safety systems.

Launched with a series of powerful V6 engines, the Touareg’s powertrain options kick off with a 282bhp, though a lower-powered version with 228bhp is set to arrive later, along with a V6 petrol engine.

It sends power to all four wheels via Volkswagen’s 4MOTION all-wheel-drive system and uses an eight-speed automatic gearbox.

Chinese markets are also set to receive a 362bhp plug-in hybrid in late 2019, though this is expected to be offered in Europe sometime after. 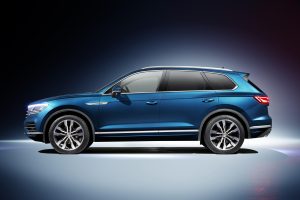 A series of assistance systems has also been fitted to the new Touareg. These include night vision, which can detect people and animals in the darkness via thermal imaging, as well as roadwork lane assist and front cross traffic assist.

Electromechanically controlled anti-roll bars should also give the Touareg excellent ride quality over all surfaces, too.

Inside, the Touareg features a fully digitalised dashboard, combining a 12-inch digital cockpit and a 15-inch infotainment system. Together, these make for one flowing widescreen stretching across the width of the dash.

It’ll be offered in three specifications – Atmosphere, Elegance and R-Line. That final specification is to be the sportiest of the trio, with chunkier looks and larger wheels.

Wider and longer than the car it replaces, the new Touareg is able to offer better levels of space and practicality than before. Luggage space is up from 697 to 810 litres with the rear seats in place, for instance.

The Touareg will also be available with an optional off-road pack, which adds additional driving modes as well as a large fuel tank – up from 75 to 90 litres – underbody protection and a radiator guard, among other features.

Despite the overall increase in size, the Touareg is actually lighter than its predecessor thanks to its use of aluminium and high-tech steels, which together shed 106kg over the older car.

UK prices haven’t been announced yet but it’s expected that the Touareg will start at around £50,000 when it goes on sale this summer.

MORE: VW boss: We will be part of the solution on diesel

MORE: Volkswagen wants R version of T-Roc and other models but no more GTIs

On WorkshopMagazine.co.uk: Ford and Jaguar units to develop parking technology