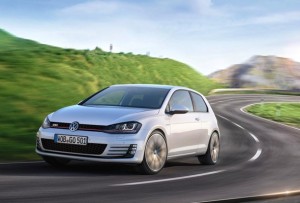 AHEAD of its official unveiling next week, Volkswagen has revealed some more details about its new Golf GTI.

With 217bhp on offer and a maximum torque figure of a hearty 350Nm, the new GTI can hit 60mph in 6.5 seconds, and goes on to a top speed of 152mph – impressive, but still a fraction slower than the 6.3 seconds and 154mph offered by the Ford Focus ST.

If those figures weren’t quite enough to whet your appetite, VW is also offering a Golf GTI “Performance” edition – hitting 60mph in 6.4 seconds and heading onto 155mph.

What’s really impressive are the GTI’s new green abilities – outputting just 139g/km and achieving a 47mpg on the combined cycle with a manual gearbox, the 2.0-litre turbocharged Golf is supposedly more efficient than a Hyundai i30 1.4 petrol.

As before, there’s a DSG gearbox on offer too – though it does knock the GTI’s fuel economy down a notch. Fitting the auto ‘box drops the Golf’s MPG to 44.1 on the combined cycle, meaning a CO2 output of 148g/km.

On the outside it’s still unmistakably a GTI – even if VW have introduced a set of crisp new alloys. The trademark red piping around the grille remains – now diving in behind the headlights too – while there’s the familiar tartan seat trim inside.

Prices are yet to be revealed for the UK, but in Germany the Golf starts at just over €650 more than the outgoing model. VW retailers in the UK will start taking orders on March 26, and deliveries will begin in June.