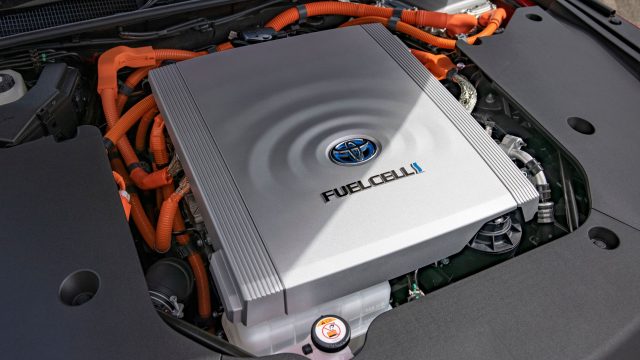 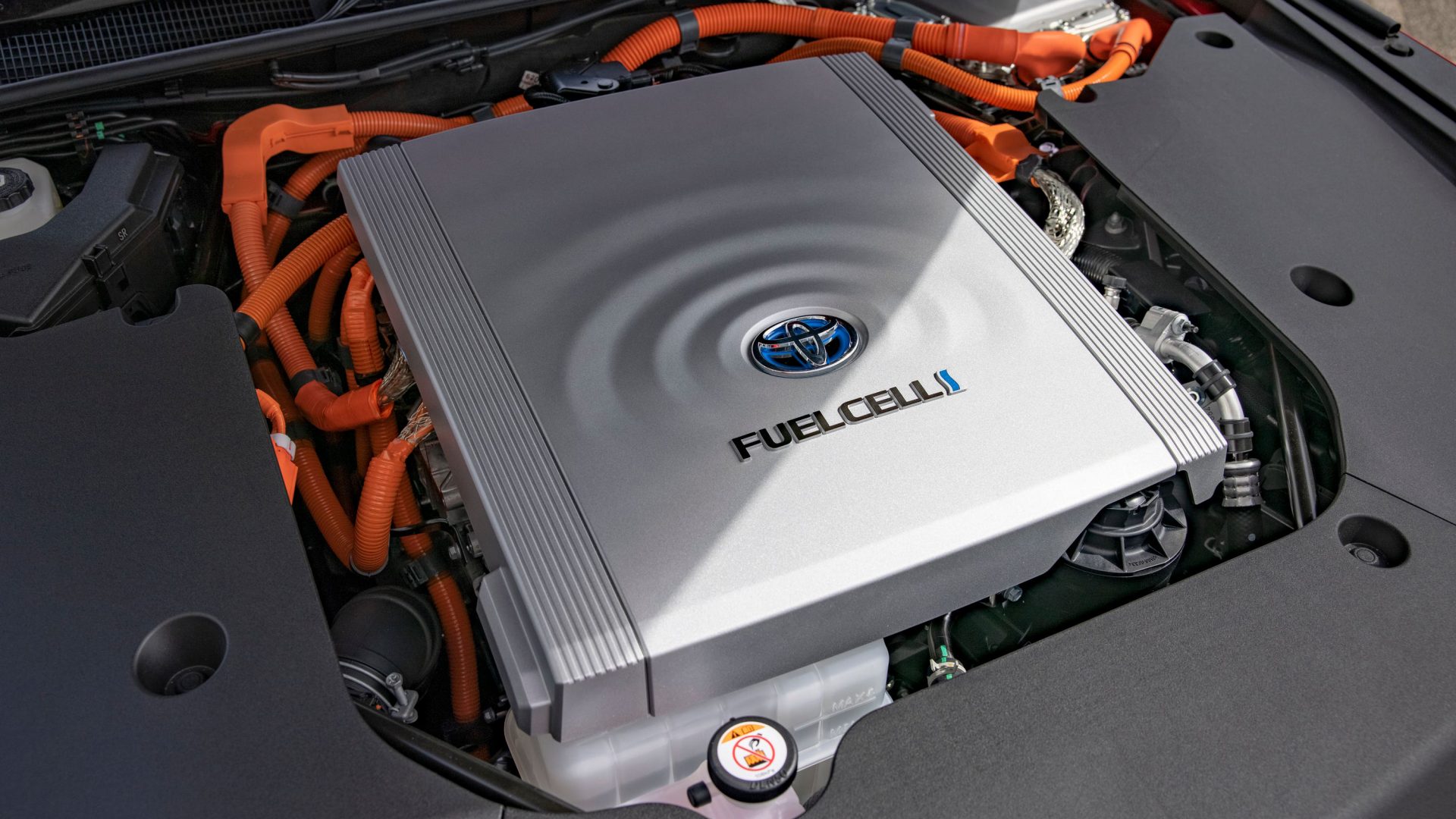 The future of motoring seems to be going down a one-way street: battery-electric.

Back in the late ’00s, Honda introduced the FCX Clarity hydrogen fuel cell car, which claimed to be the vehicle of the future.

But 15 years on, the manufacturer stopped marketing its hydrogen-powered saloon because of slow sales.

Now there are only two hydrogen fuel cell cars on the market, with just 14 hydrogen filling stations in the UK.

So why aren’t car manufacturers pushing for this technology?

The simple answer is cost and energy.

New technology is never cheap, because it’s only cost-effective when produced in size and quantity, hence why a new Hyundai Nexo or Toyota Mirai (the only fuel cell vehicles currently on sale) will see customers forking out at least £50,000 for one.

Then there’s the cost of the infrastructure, to which the UK has struggled to adapt, hence the low number of forecourts.

This not only puts people off buying an FCEV but it also makes the cars deeply impractical, resulting in very low sales.

Hydrogen and fuel cell researcher Professor Robert Steinberger-Wilckens, who is based at the University of Birmingham, blames the UK government for the slow take-up of FCEVs.

He said: ‘The UK government does not care about hydrogen filling stations or infrastructure. They don’t understand this. 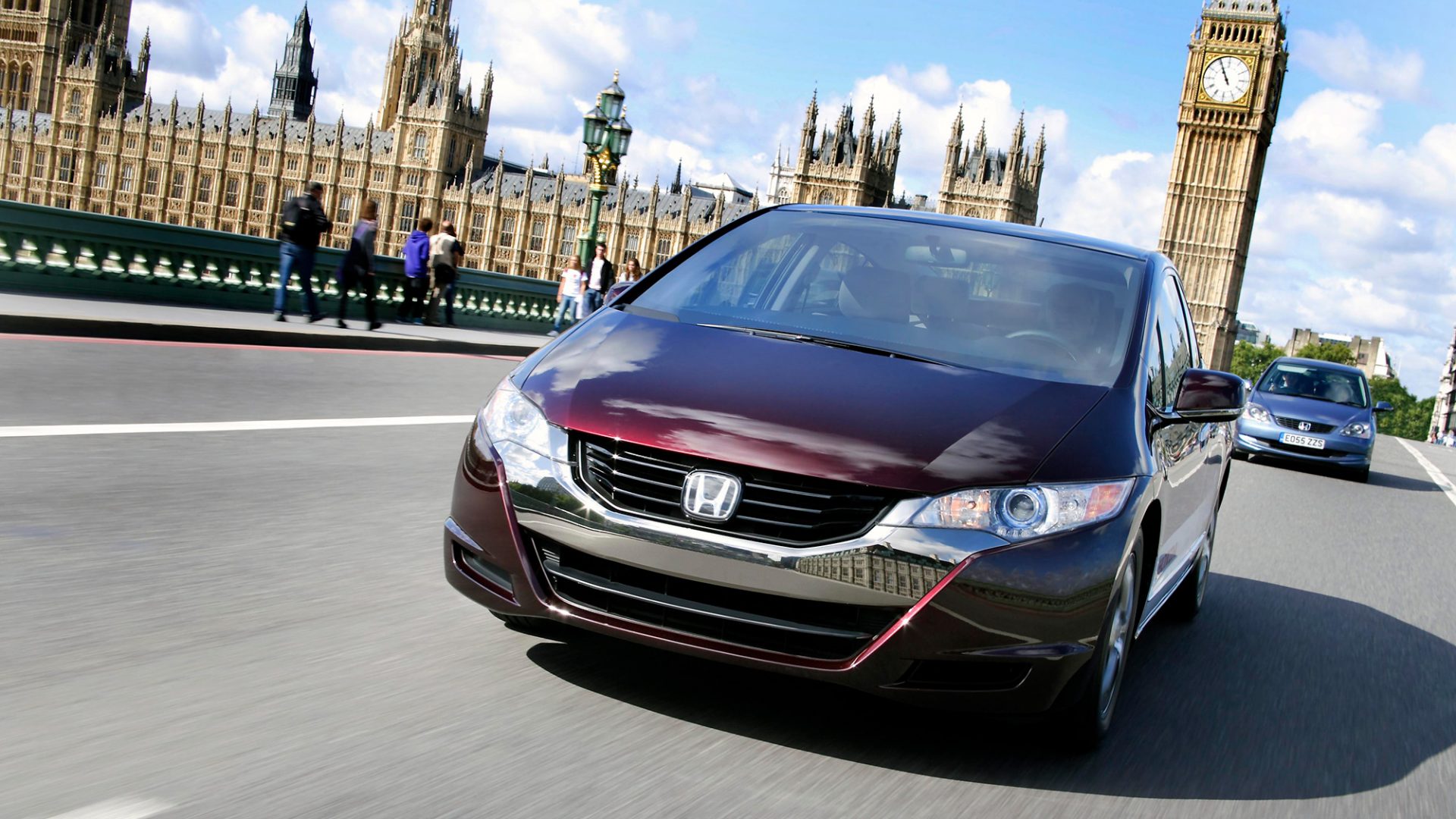 ‘In Germany, a consortium of car makers plus oil and gas companies will have built 400 stations by 2023, after which there will be no excuse for missing infrastructure any more.

‘The car companies do not believe that this will happen in the UK.’

Around the world, EVs are being made more accessible and easier to live with through the increase in charging networks, on-street charging, clubs, hubs and quicker charging times, whereas the hydrogen fuel cell concept has been pushed to one side.

So, with every new car launch being a plug-in hybrid, hybrid or full EV, hydrogen fuel cell feels like an unspoken alternative.

The next big point to make is the energy involved during the production cycle of hydrogen fuel cells.

There are new schemes to produce hydrogen via wind turbines, and offshore turbines could generate electricity that could then be taken onshore via a high-voltage undersea cable.

However, a lot of car companies argue that by the time the hydrogen has made it to its exclusive pump, the amount of energy wasted in producing the substance has made it redundant as far as being an ultra-low-emission alternative is concerned.

Professor Joeri Van Mierlo, editor-in-chief of the World Electric Vehicle Journal, said: ‘Hydrogen needs to be compressed to be stored in a car, where it is converted with a fuel cell back to electricity to drive the car.

‘All these conversions are resulting in much higher renewable electricity consumption.

‘In short, you need three to four times more wind turbines to drive the same distance with a hydrogen car than with a battery-electric car. 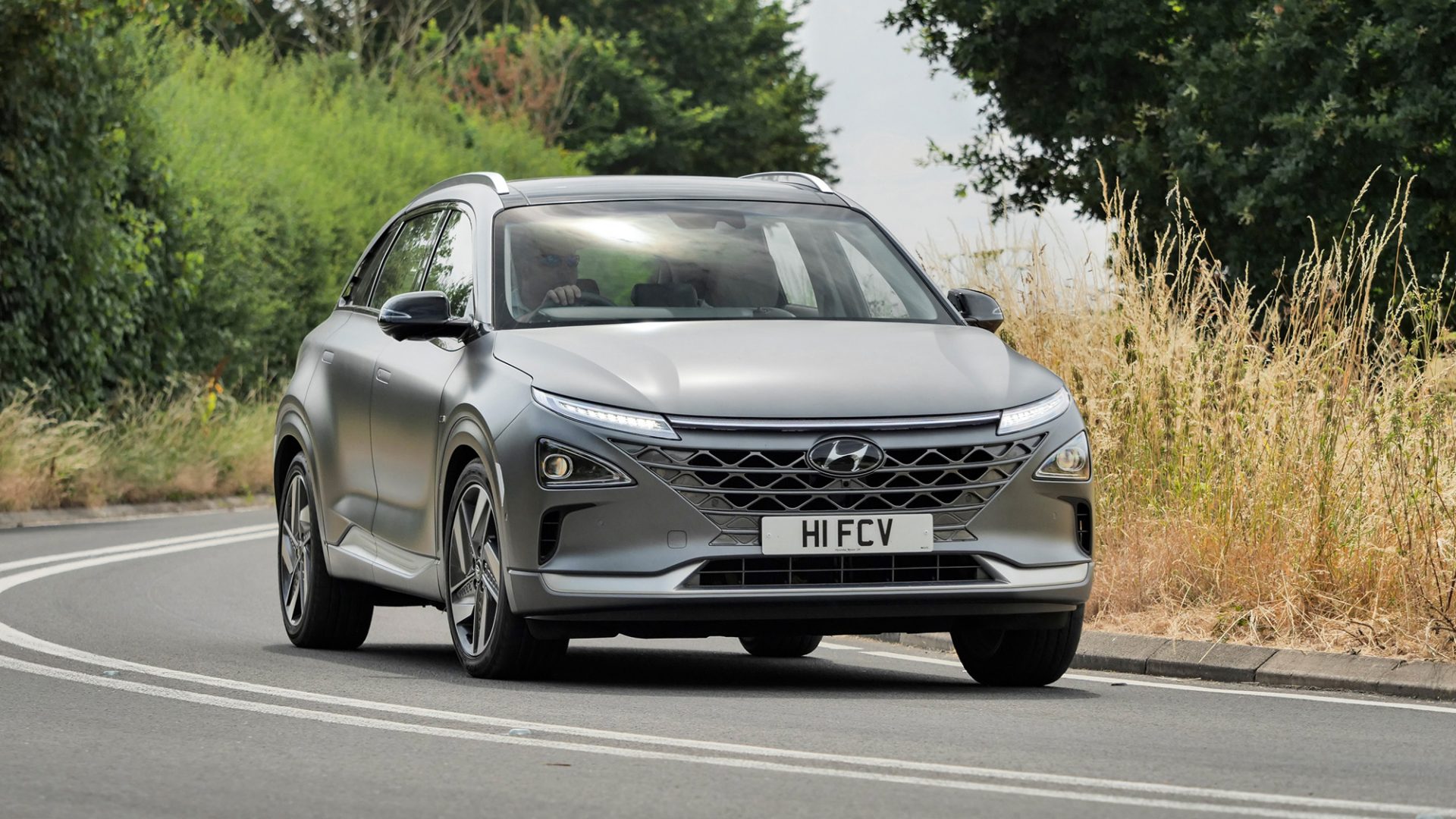 ‘As a result, fuelling a hydrogen car will always be more expensive than charging a battery-electric car.’

Hydrogen’s Achilles’ heel is the energy density of its production, which is currently three times higher than producing diesel or petrol.

And with governments pressurising car manufacturers with tighter emissions regulations and upcoming Euro 7 emissions targets, the only viable option is to go battery-electric.

Hydrogen fuel cells currently seem to be targeted at the aeronautical industry and heavy goods vehicles instead, purely because the capacity of a battery wouldn’t make it a viable option, owing to the miles they cover and hydrogen only taking a few minutes to fill up.

Charging a battery takes a lot longer, so would be extremely time-consuming for an aeroplane.

As far as passenger vehicles are concerned, the future therefore looks to be battery-electric for now.

Car makers are using EVs not only to keep governments happy but also to experiment with renewable energy to charge up vehicles, as for many years EVs were criticised for not being green because their electricity came from coal power stations.

Manufacturers and the private sector are looking into wind and solar energy as the main alternatives for a cleaner future.

It’s not all doom and gloom for hydrogen, though.

Some car makers such as Porsche and Toyota are still committed to the technology and even think that hydrogen could potentially work for internal combustion engines.

For example, Porsche announced last year that it was producing a low-carbon synthetic fuel to keep its classic models on the road. 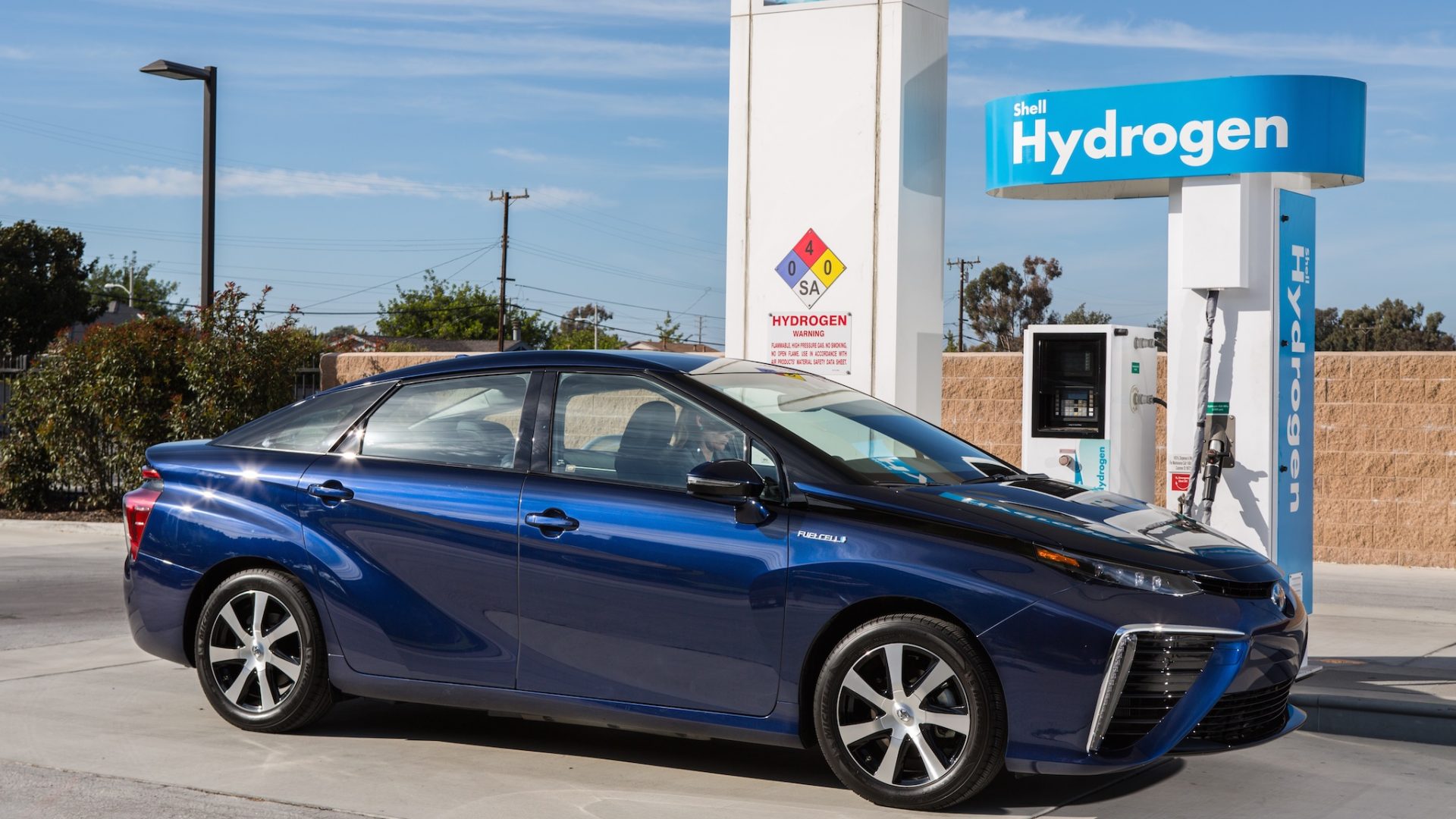 A Toyota Mirai is filled up at a hydrogen pump

To make synthetic fuel – or e-fuel – hydrogen has to be mixed with carbon dioxide. The combined mixture is then turned into a fossil-fuel-free liquid.

Meanwhile, Toyota is not only committed to the technology but it has also produced an internal combustion engine that runs on hydrogen, with the only emission being water vapour.

It’s currently at the concept stage and is undergoing trials in a 24-hour endurance racing Corolla in Japan as well as a pre-production GR Yaris to demonstrate that the engines could not only be made for racing but for the road as well.

This would seem to show that hydrogen may have a place in the automotive world in the future, and we could see an internal combustion hydrogen engine in a full production-ready road car very soon.

The vast majority of car companies have turned away from hydrogen because of the high density of energy consumed in its production, as well as poor funding and backing from governments, which is stopping the hydrogen revolution from expanding ever more.

With the ban on internal combustion engines only eight years away, hydrogen has a lot of catching up to do if it’s to play any significant part in the fuel revolution.