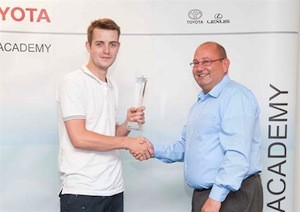 DANIEL Barlow and Tony Glover have been crowned the champions of the 2013 Toyota and Lexus customer service competition.

Body technician, Daniel Barlow, from RRG Accident Repair Centre in Boston and paint technician, Tony Glover, from Parklands Toyota in Helston were both rewarded with a trip to the brand’s HQ in Japan.

Focusing on the talent of both bodyshop and paint technicians, the annual event was this year hosted by the Toyota and Lexus Academy in Nottingham.

Supported by a number of Toyota supply partners including 3M, Akzo Nobel, Axalta Coating Systems and Car-O-Liner, the contest was divided into separate sections for body repair technicians and paint technicians who hold a Senior ATA license.

After making their way through an online multiple-choice test and an invigilated written exam, four finalists from each category competed in the final to test both practical skills and the ability to follow technical methods and instruction.

As part of their prize package, Barlow and Glover attended Toyota’s 23rd Annual Assembly of International Customer Service Champions in Japan and were joined on the week-long trip by the UK’s Lexus Technician Champion 2013, Tony Simmons, from Lexus Norwich.

Steve Settle, director customer services at Toyota GB, said: ‘The annual customer service champions competition is one of the ways in which we invest in the skills of the men and women working in our Centre Network. With the focus this year on our body and paint, we have helped our technicians develop their abilities through friendly, but hard-fought, competition.’

He added: ‘The talents shown by everyone taking part play an important part in helping ensure we can continue to deliver the best possible quality to our customers.’