That’s according to Auto Trader’s Fastest Selling Index, which tracks the potential speed at which vehicles will sell based on live supply and demand in the market, showed that demand for SUVs is still holding strong.

The Sorento, similar to the one pictured, was joined by six fellow SUVs on the top 10 list of quick sellers as of September 23, 2020. 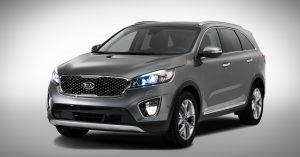 They include the Mazda CX-5 2016 diesel manual, which was July’s fastest-selling car, and is taking 25 days to move off forecourts at the moment.

The 2014 diesel automatic Kia Sorento is taking the same number of days, while the 2014 diesel manual Peugeot 2008 is lingering for 26 days.

Meanwhile, Auto Trader’s Market Insight showed that demand for SUVs was up 33.4 per cent year on year, which was higher than any other body type.

The wider market for used cars continued enjoying a surge in demand, rising by 21.1 per cent year on year for the week beginning September 14.

Auto Trader said that all body types were experiencing a rise in demand, meaning 20 weeks of consecutive price growth for used cars. 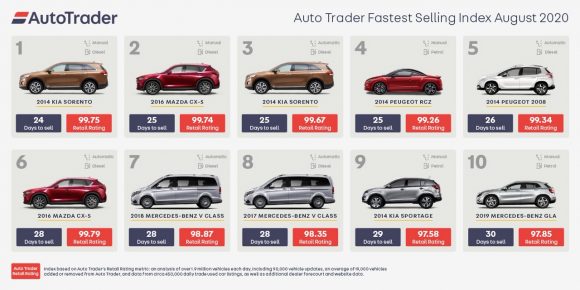 For the week of September 14 to 20, its pricing data showed that average prices rose by 7.7 per cent year on year.

The petrol manual BMW 3 Series had the largest month-on-month increase, with asking prices for one-to-three-year-old vehicles in Sport trim soaring by 23.3 per cent.

Karolina Edwards-Smajda, Auto Trader’s director of commercial products, said: ‘The sustained consumer demand coupled with decreasing days to sell is supporting the continued price growth, which all points to a healthy market at the moment.’

But she warned: ‘Whilst all demand metrics point to healthy used car sales, few retailers can afford to be complacent.

‘Retailers should capitalise on the huge demand by utilising the most up-to-date data to help them make decisions on what to stock and how to price it, which is especially key at a time when sourcing stock is a challenge.’