Home > News > Aberdeenshire dealership targeted by thieves over the weekend 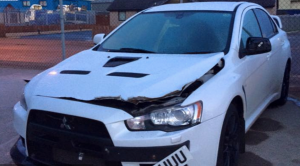 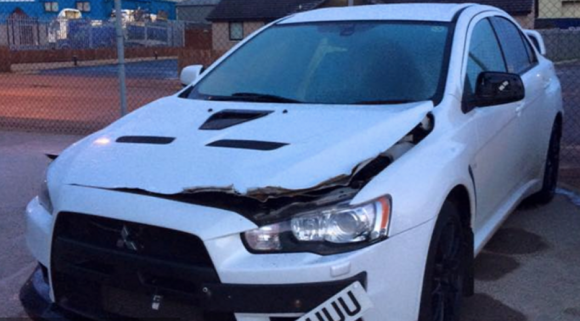 Aberdeenshire dealership targeted by thieves over the weekend

CRIMINALS have severely damaged a £20,000 Mitsubishi Evo parked at a car dealership in Aberdeenshire.

The yobs used a crowbar to try to steal the Evo 10, parked at Jim Reid Vehicle Sales based on the outskirts of Kintore.

Company boss Reid told us: ‘It looks like the car was damaged on Saturday night going into Sunday morning. They have obviously tried to steal the vehicle and attempted to get under the bonnet without opening the car – that’s why the bonnet is all curled up at the edges.

‘They’ve obviously used a big lever or crowbar to get underneath. They’ve also tried to take some of the plastic vents off to try to get in that way – they have completely ruined the whole front of the car.

‘Once they got to the point where they realised they couldn’t get in, they smashed the windows to then open the bonnet. But because they had wrecked the bonnet completely, they couldn’t even get the bonnet open.

‘So the windows are wrecked, the doors are damaged and the whole front of the car is ruined. It was an attempted theft of the car rather than vandalism.’

Reid continued: ‘That car is owned by ourselves. It came in as a part-exchange on Thursday and was at our prep centre being looked at before going onto the forecourt. It never actually made it to the forecourt, however.

‘Crazily enough, there’s a beautiful customer’s Subaru and a 350Z right next door to the Evo and neither of those were touched. It was definitely the Evo they were after.’

As we chatted to Reid this morning, the police were on the premises carrying our fingerprint searches and he was preparing to talk to detectives later this afternoon.

‘Luckily there are some CCTV images so fingers crossed,’ Reid added. ‘And at least the car’s still here, so that’s one of the good things about the situation. Of course, I hope it won’t be written off.’

Jim Reid Vehicle Sales was named dealers’ dealer of the year at the 2015 Used Car Awards and was also highly commended in the Used Car Dealer of the Year category.

A Police Scotland spokesman told the Evening Express newspaper: ‘We are aware of the incident and investigations will be carried out.’

On SuperUnleaded.com: Are supercars too slow for you? How about buying this 2,200hp Lambo?