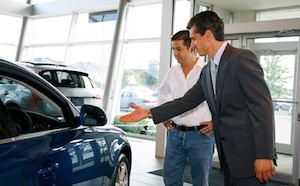 ALMOST one in four adults is thinking about buying a new car in the next six months, according to research by Sainsbury’s Bank.

And the average amount each individual anticipates spending is £10,290, slightly lower (nine per cent) than six months ago when the average was £11,249.

The research reveals consumers are increasingly choosing a loan or other finance to pay for a vehicle, with 42 per cent of car buyers intending to use some form of finance, a two percentage point increase on six months ago. The figures show 23 per cent of adults are considering changing their car before September.

Simon Ranson, head of banking at Sainsbury’s Bank, said: ‘The number of people who are planning to buy, and the amount of money they propose spending, looks pretty steady compared to six months ago. It is certainly a great time to buy.’

MORE: Chrysler resources will be put to better use allocated to Jeep