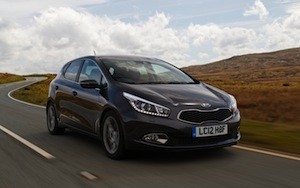 More than two million new cars were sold in the UK over all last year, after selling almost 80,000 new cars in 2012, Arnold Clark accounted for nearly four per cent of overall sales.

Last year, the business sold almost as many cars as Honda and Mazda combined, recording a 10.3 per cent increase in sales year-on-year.

Its used car sales also grew by 4.6 per cent to 122,400 units, while fleet sales rose by 11.5 per cent. This is partly due to a number of new contracts, which saw the business acquire 34 outlets throughout the year in England and Scotland.

Sir Arnold Clark told Car Buyer: ‘Whilst the wider economic situation remain uncertain, the consensus in the motor industry is for modest growth in both the new and used retail markets.’

He added: ‘We have laid down strong foundations for growth and are fully committed to achieving our goal of being the UK’s pre-eminent motor trader.’