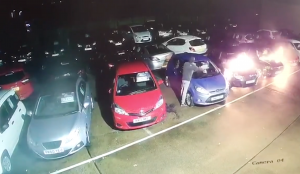 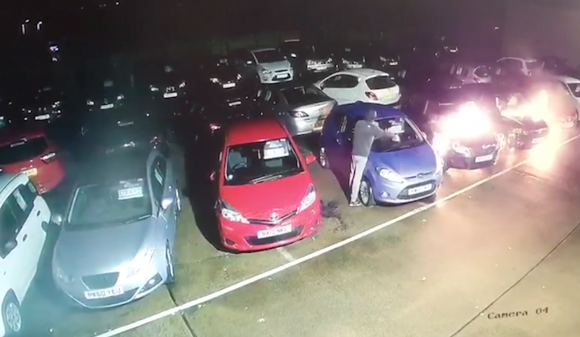 Arsonist sets fire to 10 cars in ‘targeted attack’ at dealership

AN ARSONIST set fire to 10 cars at a dealership in Northumberland at the weekend – in what is believed to be a targeted attack.

CCTV footage captured the attack, which is being investigated by police, and shows a hooded figure approaching the vehicles at the Village Car Centre showroom in Ashington late on Saturday night.

The person appears to douse a vehicle with a flammable liquid then ignites the solution. The bonnet is quickly engulfed in flames while the criminal turns their attention to the vehicle parked next to it – before working their way along the row of vehicles.

It appears the individual then puts more fuel on to the fire and takes a few steps back to ‘admire’ the scene.

The company, which is still open for business, is stepping up its security and also faces increased insurance costs, with the loss in profit from the destroyed cars believed to be as much as £12,000. She said: ‘It’s horrible to think that somebody could just come and do this for whatever reason to another person, to another business.’

It follows another arson attack 10 weeks ago at the dealership that destroyed three cars, and Gascoigne, who co-owns the dealership with Mansel Wetherell, said she believed the company was being deliberately targeted to put it out of business. ‘Nobody decides to pop in somewhere at 11.15pm with lighter fluid or barbecue fluid, pour it on five cars, set them alight one after another and watch them burn. You don’t do that – especially not twice.’

She added that CID had been to the dealership today to take details and officers were hoping to get further footage from other businesses along the road that could help catch the perpetrator. And she praised the public for the support that Village Car Centre had received since the attack.

‘At the moment it looks like we’re trying to run a business out of Beirut because there are burned-out cars everywhere, and it’s just very difficult,’ she said.

However, she added that they were determined to keep powering through. ‘We’ve got five employees here. It’s dreadful for us as business owners but the employees are really worried in case we can’t keep going through this – it’s their livelihoods, it’s their jobs, it’s their mortgages, their children. It’s just horrible that somebody would do this. But as much as we can possibly do, we’re going to keep on going and not let them make a difference.’

The vehicles written off were a Ford Focus, Ford Fiesta, Skoda Fabia, Toyota Yaris, Seat Ibiza, Fiat Panda, Ford C-Max and Vauxhall Astra. The two that are possibly salvageable were another Seat Ibiza and a Peugeot 207.

Northumbria Police are treating the incident as arson and anyone with information about it should contact them on 101, quoting reference number 1239 19/10/19.

Image via Village Car Centre CCTV and used with permission