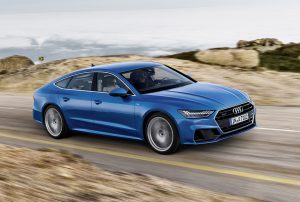 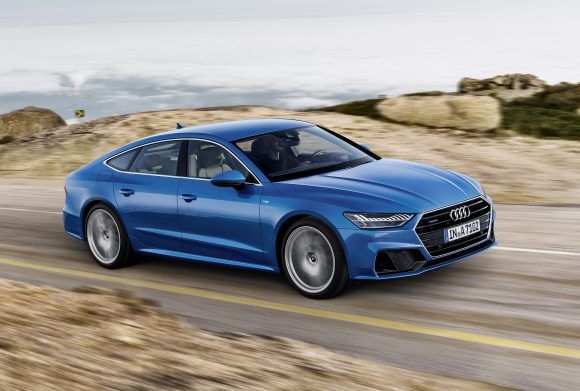 Audi has overhauled its executive-class five-door coupe for 2018, giving it a refreshed look both inside and out, plenty of technology, and the promise of improved driving dynamics.

With the A7 Sportback, the German carmaker is hoping to take the flashy design of a coupe, and marry it to the comfort of an executive saloon and the practicality of an estate. With the old model it was incredibly successful in doing this, so the new one has a lot to live up to.

Audi says that the ‘rakish silhouette’ is just about all that’s carried over from the previous- generation A7 Sportback. Engineers have worked to reduce rolling road noise, there are fewer vibrations throughout the body, and acoustic glass helps to keep the cabin ever quieter. Coupled with ride-improving air suspension, it all makes the A7 an excellent long-distance cruiser. Electrification has also made its way to the new A7 Sportback, with a mild hybrid set-up included on both diesel and petrol variants.

Other new features include a suite of driver assistance aids, such as a semi-autonomous cruise control system and parking pilot, which lets the driver leave the parking to the car’s computers.

There’s a choice of two engines, one petrol and one diesel, and both three litres in size. They’re denoted using Audi’s new naming structure, with the diesel badged as 50 TDI and the more powerful petrol known as 55 TFSI. Audi reckons about 80 per cent of sales will be diesel, but in our limited time with the 50 model, we found it to be noisier and less refined than you’d expect.

Much more A7-like is the 55 TFSI petrol. There are no economy figures for the diesel just yet, but they’ll be considerably better than the official 40mpg the petrol achieves. However, for such a large vehicle that’s not too bad, and with 335bhp it’s surprisingly sprightly, too – the 0-60mph dash takes just over five seconds.

The ideal driving scenario for the A7 Sportback is out on the open road, with the cruise control set to 70mph as the miles roll by. Particularly in petrol guise, it’s quiet and serene, and the ride is generally exquisite. Opt for the sport suspension and you do sacrifice some quality – the ideal option is the adaptive air suspension.

That’s not to say the A7 isn’t fun on a back road. Our test route took in winding mountain passes and it performed admirably, helped by the all-wheel steering, which makes the rear wheels turn the opposite way to the fronts at lower speeds to improve agility, and in the same direction at high speeds for better stability. In corners, the improvements over the old model are like night and day.

To us, the previous model looked more athletic than this new version, which replaces the old angular design with a softer approach. The result is a slightly frumpier appearance. One big advancement is the lighting signature, though. There’s LED technology both front and rear, giving the car a seriously modern look and ‘welcome home’ animations that add character.

One criticism that’s often levelled at Audi is that its interiors feel largely the same whether you’re in an A3 hatchback, A8 saloon or R8 supercar. However, the new-generation cabin debuted in the A8 and continued here in the A7 feels futuristic and a big step forward.

A larger wheelbase means there’s more cabin space too, while a pair of large central touchscreens declutter the dashboard. However, with almost all functions taken away from physical buttons, it can be a bit of a faff trying to navigate even basic menus such as climate controls and radio.

Features common to both trims include Audi’s digital instrument binnacle called Virtual Cockpit, wireless smartphone charging, and driver aids such as front collision warning and automatic parking. Pricing for 50 TDI diesel models has yet to be confirmed, but 55 TFSI petrols start at £55,140 in Sport trim and £58,040 for S-line models.

Auto Express said: ‘The A7 Sportback’s distinctive look is the perfect antidote for those fed-up with the conservative design of Audi’s saloon line-up.’ Top Gear commented: ‘The most amazing part of the new Audi A7 Sportback is that you can actually tell it’s new.’

Previous A7 owners won’t take long to get used to the general driving experience – this car is quiet, comfortable and spacious. However, where the German carmaker has really moved the game on is the interior and handling. The cabin feels futuristic, while the cornering ability is seriously impressive for a vehicle of this size.