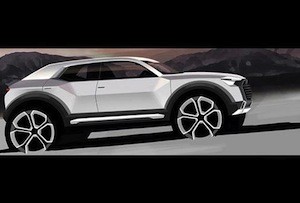 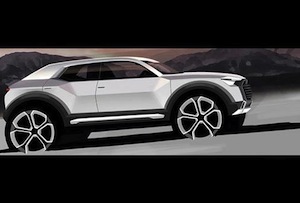 AUDI AG has confirmed that a new SUV model will be produced at its Ingolstadt plant in Germany from 2016.

Named the Q1, the new SUV is Audi’s latest edition to the Q range and it set to strengthen the company’s international competitiveness.

This follows the announcement that the brand will expand its product range from 49 models to more than 60 in order to reach total unit sales of more than two million cars each year.

The decision to produce the new Q1 is set to help Audi ensure its main plant in Ingolstadt will remain in use long term, where models in both the A and B segments including the A3 and A3 Sportback are produced.

Audi has produced and delivered more than 1.5 million Q models since the market launch of its first SUV in 2006 and a production total of 230,000 Q5s are planned for 2013, which is more than half of the total Q family volume.

The proportion of the company’s total production volume accounted for by SUVs will be approximately 28 per cent this year and is planned to rise to more than 35 per cent by 2020.

Rupert Stadler, chairman of the board of management of Audi AG, said: ‘The Audi Q1 is part of our broad-based SUV strategy. It is designed on the basis of the modular transverse engine concept and will round off our Q series at the bottom end.’

Peter Mosch, chairman of the General Works Council, added: ‘This is a clear commitment to Ingolstadt as a production site. We will continue to make every effort to develop the plant even further as the leading technological site of the Audi Group.’