Staff at the world’s largest Ford dealer group and its supply partners who took part in Breakout for Ben contributed £55,000 to the sum, taking the total now raised to just under £737,000.

The entire automotive industry was invited to get involved in Breakout for Ben – the latest Do It 4 Ben challenge – in February and a total of 986 people answered the call.

Together, they walked, ran, biked and exercised their way for more than 80,000 miles.

Teams went on a virtual journey to motor circuits across the UK, starting at Pembrey Circuit and ending at Silverstone.

The charity issued a plea last November as it tried to cope with a 50 per cent rise in demand for its services against a £1m drop in income. thanks to the pandemic forcing it to cancel various fundraising events.

Stuart Foulds, chairman and chief executive of TrustFord, said: ‘With all the support Ben has continued to provide and knowing that the charity needed more support, I was very happy to lend TrustFord’s Breakout for Ben event to a broader audience of participants. 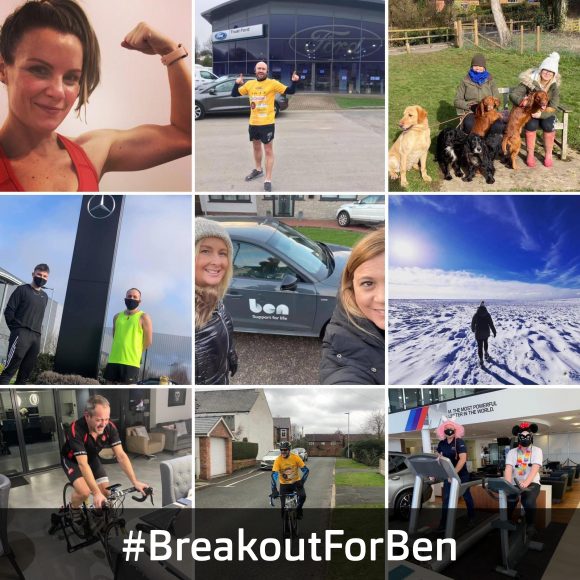 ‘I am thrilled that TrustFord colleagues raised £55,000 on top of the £20,000 donated by the business late last year and am hugely proud of the TrustFord team for all their support and engagement.

‘This means that over the past three years our group has contributed over £300,000 to this great charity.’

Ben fundraising director Matt Wigginton said: ‘Breakout for Ben has been incredible! We’ve been completely blown away by everyone’s determination, both individually and collectively in teams.

‘Congratulations to all our competition winners and a massive thank you to everyone who took part and donated!

‘Thanks to the incredible support of our industry, we’ve made a huge dent in the £1m fundraising shortfall we faced during the pandemic.

‘This means we can always be there to help people in our industry when they need us the most.

‘Automotive people continue to need us now more than ever and the issues they are facing now are more urgent and complex than ever.’

The Breakout for Ben competition winners

Used car prices stay above £8,000 at BCA as record number of bidders look to stock up