Britons do not believe the economy and businesses should open if coronavirus is not fully contained, according to a poll of 28,000 people in 14 countries.

The Ipsos Mori poll found Britons were the least likely to believe restarting the economy was the right approach as ministers face continued questions over the UK’s plan for lifting the lockdown.

Britons had the strongest views against opening up the economy if the virus is not fully under control, with 70 per cent of those surveyed saying they felt this way. It comes as a number of British businesses have said they are set to start opening despite the lockdown.

Are car dealers allowed to offer click and collect for car buyers?

As public sentiment shows they are keen for firms to stay shut, the debate as to whether car dealers can offer a click-and-collect style service under lockdown rages on.

Car Dealer Magazine has asked legal experts whether dealers can operate a click-and-collect service now, but while one told us they thought dealers can, another said they thought not.

You can read their thoughts here – and hear why Marshall’s boss Daksh Gupta isn’t going to be opening just yet.

For those dealers who do decide a click-and-collect service is for them, we have pulled together some best practice advice on what precautions to take here too.

Eighty-five per cent of drivers think electric car charge point signage should be green instead of blue.

More than 17,500 drivers were polled by the AA, with the vast majority saying that the signage colour change would make charge points more prominent.

The recovery service suggests that changing the colour would help break down the barrier to ownership as non-EV owners would be more likely to notice them, as well as reducing the times other cars block charging points.

British Airways is set to make up to 12,000 workers redundant, parent company IAG has announced.

The airline, which employs 42,000 people, has suffered from the global collapse in passenger numbers caused by the pandemic.

IAG said BA will consult on a ‘restructuring and redundancy programme’ as it is expected to take several years until demand for air travel returns to 2019 levels.

It said: ‘The proposals remain subject to consultation but it is likely that they will affect most of British Airways’ employees and may result in the redundancy of up to 12,000 of them.’

One in seven mortgages now subject to payment holiday

One in seven mortgages is now subject to a payment holiday. As of last Friday, lenders had granted more than 1.6m mortgage payment holidays, UK Finance said.

For the average mortgage-holder, the payment holiday amounts to £755 per month of suspended payments.

Ford to restart European production on May 4

Ford has announced that it plans to restart production at its manufacturing sites in Europe via a phased approach from May 4.

The Blue Oval will recommence production at its Saarlouis and Cologne plants in Germany, vehicle assembly site in Valencia, Spain, and its Craiova plant in Romania.

However, it has yet to confirm a date for its Dagenham and Bridgend sites to restart.

Royal Mail has scrapped Saturday letter deliveries across the UK until further notice due to the pandemic.

Royal Mail will continue to collect all mail from businesses, post offices and post boxes, it said.

Senior management at John Lewis have started discussions on which department stores should be closed permanently.

Sources close to the employee-owned retailer told the PA news agency that it was ‘highly unlikely’ that all 50 sites would reopen, as the company battles for its future.

Online grocery sales expected to jump by a third in 2020

Online grocery sales are expected to grow by around a third during 2020 as people change their shopping habits.

It said recent changes in people’s shopping habits may be long lasting, with 36 per cent of people having increased the amount of online shopping they do generally.

Starbucks saw its global sales tumble in the first three months of 2020 as coronavirus-related shutdowns hampered its operations.

The Seattle-based coffee giant said conditions will likely worsen before levelling out later this summer, adding recovery will extend into 2021.

Starbucks said sales fell 10 per cent globally in the period between January and March. More than 75 per cent of its stores in Japan, the UK and Canada are closed, but 98 per cent have reopened in China.

The full impact of Covid-19 is set to be revealed as the government prepares to unveil daily death numbers in hospitals, care homes and the community.

There is an 11-day lag for the data on the number of people who have died in care homes and their own homes from the virus.

Health Secretary Matt Hancock said up-to-date figures to go alongside hospital deaths will be revealed today, while data dating back from early March up to April 28 would also be declared.

A government graph comparing the nation’s death rate to other countries indicated that, once these deaths were factored in, the UK could end up with the highest casualty rate in Europe. 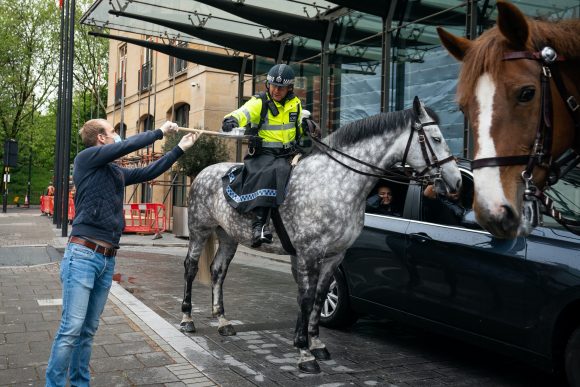 A five-star luxury hotel in London is serving up meals for a different kind of suited and booted clientele.

The Berkeley Hotel in Knightsbridge may have shut its doors to guests but its kitchens are busy at work cooking meals for emergency workers.

A free drive-through was launched on April 16 outside the hotel in Wilton Place, providing hot food to all NHS staff, police and fire crews. Yesterday, police officers on horses were pictured being served drinks by hotel staff.

Midday today: Franchised, independent dealers and an expert will be appearing on Car Dealer Live here talking about how you can sanitise your car properly

What do James Baggott, Big Mike and James Litton have to say in Car Dealer Magazine Issue 146?

Waste not, want not – JLR to use recycled plastic, fabric and fishing nets for mats and trims