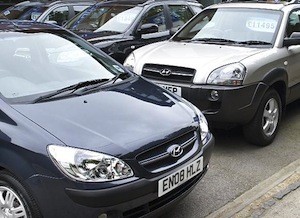 According to the BBC, car sales are being put at risk after the processes to register new cars by dealers have become harder.

‘It is horrendous and a shambles,’ William McCausland from Fonacab and Crawford Clarke cars told the BBC. ‘We are having problems every day. Most of the cars have to go out with English number plates.’

The practise of registering a car in Northern Ireland was transferred to the DVLA’s head office in Swansea in July. But the DVLA says there have been problems with the switch.

McCausland says that when car dealers buy English cars to sell in Northern Ireland, the wait to get road tax and local registration plates is taking too long and putting sales at risk.

‘The customers do not like the look of the English plates. It has become a torture,’ he said. ‘To tax the vehicle used to take an hour or so. But we have one vehicle that has been at the bottom of our yard since July 30. We were on the phone and they still cannot even find the documents that were sent to the DVLA centre in Swansea.’

The problem isn’t just affecting car dealers but individual drivers as well – especially those wishing to register a cherished plate.

A DVLA spokesman told Car Dealer Magazine: ‘More than 1.7 million Northern Ireland vehicle records were successfully automatically transferred to DVLA on July 21 – that’s nearly 96 per cent of the total number of vehicle records that were previously held by the DVA.

‘Due to issues with some of the records provided from DVA we are manually transferring the remainder. Of these records only around 850 were due for tax in this month and we have been prioritising these for urgent resolution.

‘We have always expected a very small number of issues in the data migration. This is well in line with our expectations and contrary to wider comment, DVLA’s systems have operated very successfully during the migration.’

DUP (Democratic Unionist Party) MLA (Member of the Legislative Assembly) Michelle McIlveen told the BBC in July that the relocation to Swansea had been causing massive headaches for local car dealers. While in England, a car must get an MOT test after three years, it’s four years in Northern Ireland.

‘Where a car is registered in England in June 2011 and then sold in Northern Ireland in July 2014, a dealer can find himself being told that an application for car tax will not be processed because the computer system will state that it requires an MOT,’ she said.

‘At the same time, the vehicle cannot be MOT’d in Northern Ireland because it is not old enough. In dealing with a situation such as this, Swansea, after some negotiation, agreed to process the application but it would take up to four weeks.’