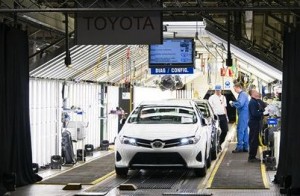 BRITISH car production posted healthy growth in September, according to figures published today by The Society of Motor Manufacturers and Traders.

Output rose by 15.5 per cent compared with September last year, with year-to-date volumes 3.3 per cent up on the same period in 2015.

As seen in previous months, production for the UK market led the way with a gain of 20.1 per cent – but new car exports were not far behind with a robust 13.9 per cent increase in volumes. September’s results follow latest industry projections that set British car manufacturing on track to achieve record production levels by 2020.

Mike Hawes, SMMT chief executive, said: ‘After the regular summer break, manufacturing plants were back in full swing in September and the gains made by the UK’s car makers are positive. Particularly encouraging is the recent upturn in exports, which are higher than they were in 2014, reflecting growth in key overseas markets such as the rest of Europe.’

John Leech, head of automotive at KPMG UK, said: ‘The number of cars made in the UK in September beat expectations and all plants performed well.

‘We expect further strong gains in the months ahead.  The recovering EU car market means that the UK car industry will continue to grow in both in the short- and medium-term notwithstanding the strong pound.’

On SuperUnleaded.com: Video Of Boris Johnson in Tokyo Will Make Your Day