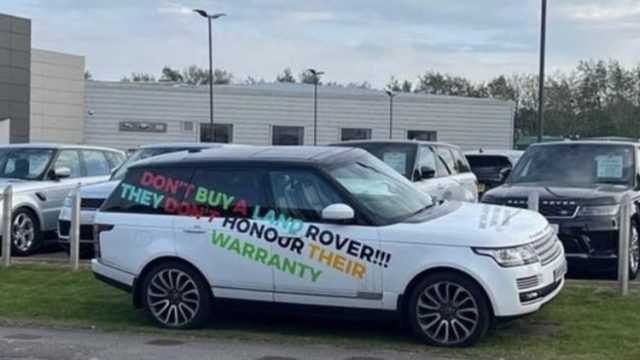 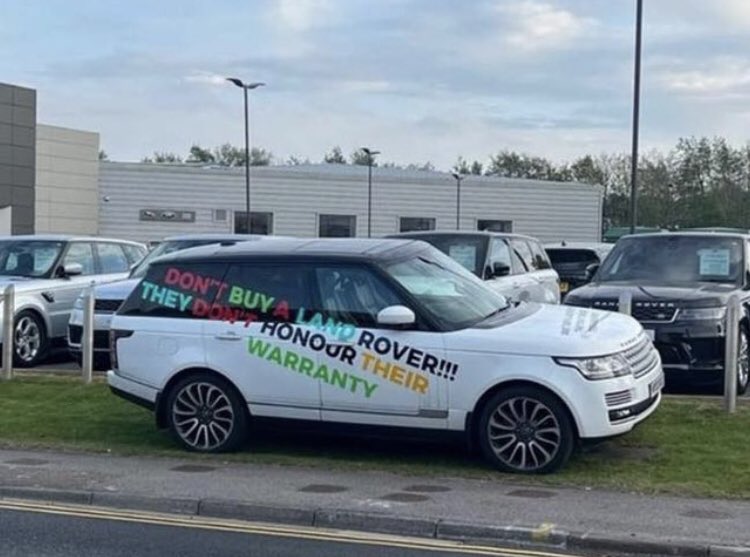 A Land Rover dealership in Cardiff has taken out an injunction after an angry customer blocked the showroom in protest after they refused to fix a car he bought from them.

The entrance to Stratstone Land Rover Cardiff has been obstructed this week after irate customer Mike Cox launched a campaign to have his Range Rover Vogue SE repaired by the garage.

The 36-year-old has parked a Range Rover, a McLaren, a caravan and a truck outside the dealership, adorned with slogans against the showroom which has made headlines on the BBC website.

The words ‘Don’t Buy a Range Rover!!! They don’t honour their warranty’ have been blazoned across the vehicles as part of the protest.

Another reads ‘How can Thierry Bollore – the CEO of Land Rover – let it get to this?’.

@LandRover Please don’t allow the Cardiff dealership to disgrace your brand, step in and take control of Mr Cox’s (a very unhappy customer) complaint. I hear that the BBC will be getting involved now. pic.twitter.com/m54LrC5aHw

In a bid to end the disruption, the dealership went to the courts and won an injunction ordering that the vehicles be moved by Saturday (May 14).

However, Cox is refusing to be beaten and says he now will just move them to another showroom in the Land Rover dealer network.

The 36-year-old businessman launched his vendetta after experiencing issues with a Range Rover he bought at the site in 2018.

He says he took the car back eight times due to problems with the cooling system but did not get the help he believed he was entitled to under the terms of the car’s warranty.

He told BBC Wales: ‘I’ll just move them to one of the other 74 dealerships, or the head office.

‘I want them to get the message that I am not going to go away, they will have 74 vehicles outside their garages and one outside their head office – it is wrong what they are doing.

‘It’s the same recurring problem and it just hasn’t been fixed properly – I have been back and forth about eight times now and they haven’t fixed it.

‘Others would be screwed’

Cox says he is passionate about getting the right outcome as it is ‘wrong’ that his warranty is not being honoured.

He says he recently took out a fresh £2,500 warranty policy that ‘covered every issue’ but has been told the car is too old for it to apply.

The disgruntled customer held talks with Land Rover on Wednesday (May 11) but is yet to be offered any compensation.

He added: ‘It’s wrong, why did they take my money and now are using that as an excuse.

‘It’s a joke – I am not being pushed over when I haven’t done anything wrong.

‘It’s the principle, that’s why I am protesting – I can afford it but what about others, they would be screwed.

Land Rover said it was aware of the situation and remained in regular contact with Cox.

‘We are currently investigating this case and are in regular contact with the customer concerned.’