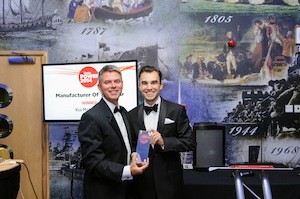 #CDPower: Car Dealer toasts the best in the business

CAR Dealer named the best manufacturers and industry suppliers in the business at a glitzy awards ceremony this week.

Some 90 winners joined Car Dealer at the top of the stunning Spinnaker Tower in Portsmouth for a lavish awards do that saw the magazine’s staff hand over awards as voted for by dealers.

The event was extremely well received and even saw industry heavy-hitters attend including Hyundai Motor UK president Tony Whitehorn and the whole board of Kia Motors UK along with UK president and CEO Paul Philpott.

And the guests were keen to put their hands into their pockets for a raffle raising funds for Great Ormond Street Hospital, totalling £600.

James Batchelor, editor of Car Dealer Magazine, said: ‘The night could not have gone any better than it did. A massive congratulations to all those who attended.

‘Winning a Car Dealer Power awards is genuinely special. Our winners are part of an elite club that is doing the job properly as recognised by dealers. The Car Dealer team has no influence or say in who wins these awards tonight. Dealers do that. We just hand over the trophies.’

During the night, attendees were encouraged to tweet and used the hashtag CDPower. And the social media platform was alight with delighted winners tweeting about their gongs…

We are delighted to announce that the Hyundai #i10 has won @CarDealerMag ‘Car of the Year’ 2014 #CDPower pic.twitter.com/SUiyB5Sac6

Thanks to those that cast their vote into @CarDealerMag ‘Power Awards’ and voting us number 1 for Trade Insurance!

@CarDealerMag #CDPower Thanks for another great evening at the Spinnaker Honoured To Win Our 2nd Recruitment Award pic.twitter.com/UrGGFkMt6G

A full report of the night will be published in the next issue of Car Dealer Magazine, out on August 18.