The classic Mini Moke is returning to the UK 56 years after it was first introduced – and Hendy Group will be the dealer to sell it.

The original Moke, built by the British Motor Corporation, first hit the road 56 years ago.

The model name is now owned by Moke International which plans to relaunch the car globally.

Just 56 examples are expected to be built for the UK, with prices believed to be starting at around £20,000.

The new Moke still uses many Mini parts but now features more modern suspension, a new 66bhp 1.1-litre engine and the choice of a manual or four-speed automatic gearbox. It’s a little larger than the original, too. 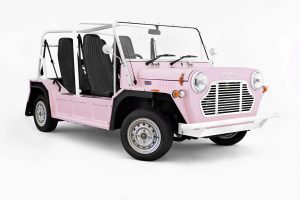 Up to now the Moke has been available in the Caribbean but now will hit British shores.

Hendy will be the sole UK dealer with the 56 cars destined for Britain available through the firm’s Sports Car division in Poole.

Hendy chief executive, Paul Hendy, said: ‘It’s great news that this amazing car will once again be available in the UK.

‘Ever since Moke announced plans to relaunch in the UK, the interest has been understandably high and we’re looking forward to helping people live the dream with the car.’

Moke International CEO, Isobel Dando, said: ‘It is important for Moke International to work with a UK dealer which has the infrastructure to support our launch back into the UK and which shares our enthusiasm and passion for the brand.

‘We are looking forward to a long and successful partnership with Hendy in Moke’s home market.’