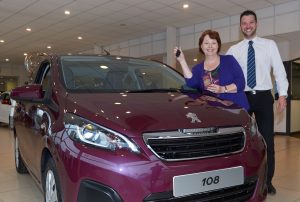 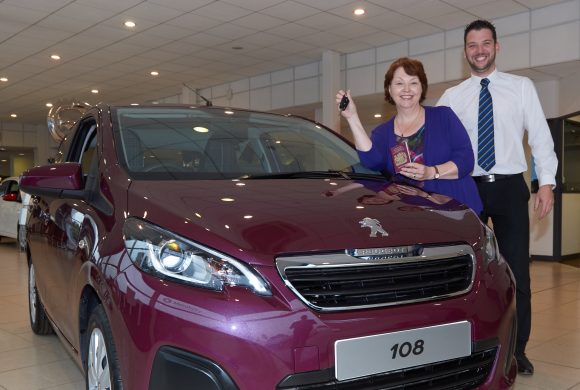 BRISTOL Street Motors Banbury Peugeot is sending a couple on the holiday of a lifetime, thanks to a competition at the dealership.

After buying a Peugeot 108 at a casino event at the Banbury Peugeot dealership, Shirley Warrington was entered into a draw to win the top prize of £3,000 in holiday vouchers. For every new car sold at the event, customers were invited to spin the roulette wheel for a chance to win a series of prizes, which also included afternoon tea for two, pressure washers and an overnight stay at a luxury hotel.

Shirley, from Mickleton, near Chipping Campden, is using the vouchers to book her dream holiday to Las Vegas, the Grand Canyon and San Francisco with her husband. Las Vegas was a favourite holiday destination of her mother, who died last year, and after finding out that she’d won the tickets on her mother’s birthday, Shirley knew exactly where she and her husband, Brian, should go on their trip.

‘Last year we didn’t have our annual holiday, as my mum was ill and I wanted to be involved in her care,’ she said. ‘My mum always raved about Las Vegas, and thanks to Bristol Street Motors I’m going to be able to see what she loved about it so much, and I’ll be doing it in style.

‘Not only will this be an amazing holiday experience, but it will be one with so much meaning.’

Stephen Craig, general manager at Bristol Street Motors Banbury Peugeot, said: ‘Our casino event was a huge success and a different, fun way to thank customers for choosing us as the place to purchase their new car.

‘We’re delighted to give Shirley her dream holiday, especially as it has such a heartwarming story behind it. We hope that she and her husband have an amazing time!’

MORE: Bristol Street Motors Cheltenham recognised by Ford as one of the best in Europe

On SuperUnleaded.com: BMW driver ends up on roof after undertaking Peugeot