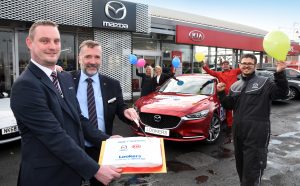 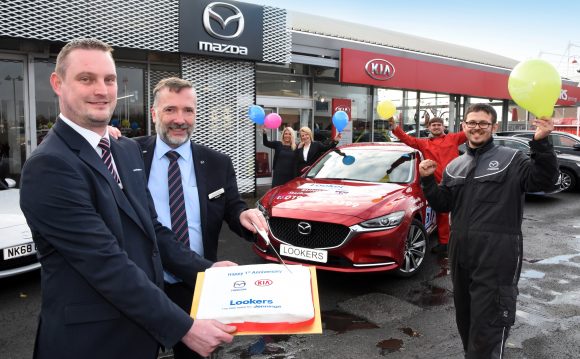 LOOKERS Mazda and Lookers Kia have celebrated their first year of successful business in Sunderland.

The official opening of the showroom, which houses both brands under one roof, also saw the creation of 24 jobs when the doors opened for the first time last year.

James Chorlton, general sales manager at the former Jennings site, said: ‘We’re delighted to be celebrating the first anniversary of the dealerships and look forward to another successful year of business in Wearside, as we continue to further develop the high-quality and competitively priced Mazda and Kia brands.

‘Customers visiting the showroom get the best of both worlds, with a display of models from two manufacturers all under one roof, as well as a second-to-none customer service from a team of dedicated and professionally trained staff.’

As part of the celebrations, staff and customers enjoyed a cuppa and slice of cake at the dealership.

Before the site, which was formerly a car dealership, was officially opened, it underwent a complete refurbishment to incorporate two 200 sq m showrooms in keeping with the corporate designs and styles of the manufacturers.

Both showrooms provide the full range of new models available across each marque, excluding the Kia Stinger, in addition to an extensive range of quality used cars and a Motability service.

First-floor interior offices overlook a double-height showroom, while the exterior has a large forecourt to display vehicles.

Aftersales is catered for with an eight-ramp workshop and MOT bay facility, where a team of manufacturer-approved technicians using the latest technology and diagnostic equipment carries out work and repairs. The site also houses an independent valet building.

Lookers bought the Jennings Motor Group in September for £5.6m for the entire issued share capital.

Pictured at top: James Chorlton cuts into the cake, held by service manager David Murphy, as other members of staff at Lookers Kia and Lookers Mazda join in with the celebrations