Home > News > It’s an early Christmas for Christopher, thanks to Lookers £5,000 competition 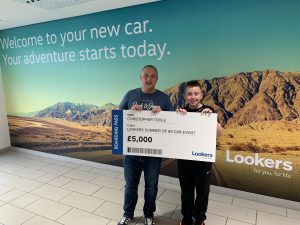 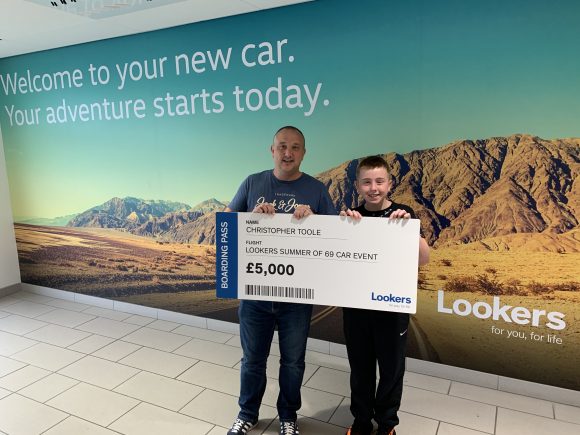 It’s an early Christmas for Christopher, thanks to Lookers £5,000 competition

CHRISTMAS has come early for one lucky customer of a North Tyneside motor retailer after they scooped a £5,000 prize.

Christopher Toole, of Great Park in Newcastle upon Tyne, entered the 69 Plate competition at Lookers Volkswagen Silverlink in Wallsend when he bought his new all-electric Volkswagen e-Golf.

As he had some queries about the car, Mr Toole left the vehicle at the dealership while he and his family jetted off for a break in Turkey – and when he returned to take it home, staff handed him £5,000 in holiday vouchers!

The team kept the prize a secret throughout his visit to the dealership, where he discussed features such as range and charge times with a Volkswagen master technician. It was only when he was about to leave that he was told by brand manager Simon Milne about his win.

Milne said: ‘Mr Toole has joined the ever-increasing number of people that have shifted over to electric driving and, so far, he has been delighted with the purchase of his new Volkswagen e-Golf.

‘He left the car with us for a week while he went to Turkey on holiday as he had some questions regarding charge times and mileage limits. I knew he had won the prize at this point but chose to deliver the great news once he returned, as a way of making his post-holiday blues a little bit easier to cope with.’

The whole experience has also had a positive impact on Mr Toole’s 11-year-old-son Daniel, who has decided that he wants a career in car retail.

Mr Toole said: ‘I can’t thank everyone at Lookers Volkswagen Silverlink enough for such an amazing surprise. We’re over the moon with our new car but this surprise has absolutely blown us away. I’ve never won anything before, so this was truly amazing.

‘My son actually got really emotional when we were told. Even before we were told about the prize, Daniel wanted to work at the dealership because of the way everyone was so nice to us. Now, after winning this, I’m sure he’ll be knocking on their door when he’s old enough.’

Pictured with the prize are Christopher and Daniel Toole