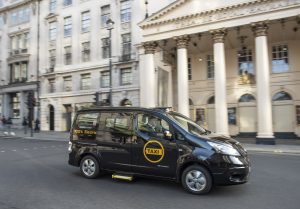 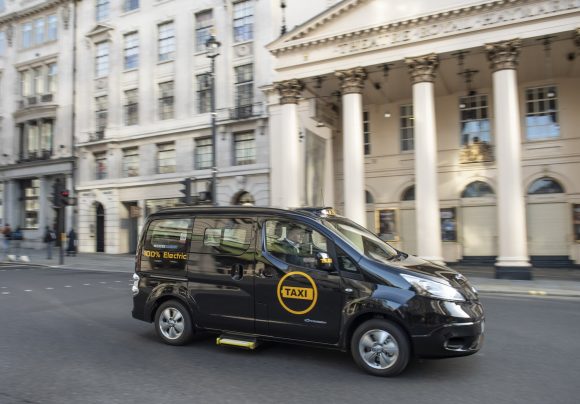 THE first 100 per cent all-electric London black cab to be approved by Transport for London (TfL) has been revealed in the city today.

The ‘Hackney Carriage’ has been created by coach-builders Dynamo, giving it the name Dynamo Taxi, based on the top-spec Nissan e-NV200 Evalia.

The all-electric taxi is re-engineered by Dynamo at its plant in Coventry but retains the e-NV200 WLTP-approved 187-mile range, while the average taxi driver only travels between 90 and 120 miles a day.

MD of Dynamo O’Toole explained: ‘The average taxi driver spends up to £25 on fuel every day, whereas the Dynamo Taxi driver can expect to spend between £3 and £6 a day.

‘When you take into account lower servicing costs, zero road tax, the Dynamo Taxi will become the UK’s most efficient and economical taxi ever.’

It has space for five passengers, adds the latest contactless payment technology, plus drivers benefit from a heated seat and steering wheel. It also has Nissan’s infotainment and telematics that will further help to improve driver efficiency and reduce running costs.

Minister George Freeman also spoke at the event, and explained how the Dynamo Taxi fits into his plans for the future of transport.

‘Firstly, 30,000 people die every year, unnecessarily from air-pollution. And secondly, the world faces an urgent challenge to slow down, arrest and in due course reverse the pace at which the planet is warming,’ he said.

‘And three, this electrical revolution is sweeping the world and the UK has a choice, are we going to lead it or follow it?’

He added: ‘In the end, Government strategies aren’t going to deliver this, it’ll be entrepreneurs like Brendan and companies like Nissan. A company that not only employs tens of thousands of people in Sunderland but also has a major engineering centre at Cranfield.’

With 180 charging points already in London and 300 pledged by 2020, Nissan Motor GB MD Sivagnanam was quick to add that all 179 of the brand’s UK dealerships are equipped with two chargers for EV customers to use.

Speaking at the launch, he said: ‘Nissan has been pioneering modern electric vehicles for nearly a decade now and we are keen to showcase how viable our EVs are and the role they can play in shaping the future of zero emission mobility.

‘The e-NV200 launched in 2014, of which the Dynamo Taxi platform is based on, has proven its worth with over 25,000 vehicles sold in Europe, making it the top selling LCV electric vehicle in Europe to date.

‘We are excited to see companies such as Dynamo taking our vehicles and developing them for different uses to address some of today’s air quality challenges.’

MORE: What to expect when doors open at the 2019 Tokyo Motor Show…