Peter Vardy reopened the doors to his 15 showrooms on Monday with a smile on his face.

‘All the way through this I have tried to only fret about stuff I can do something about and not fret about things I can’t,’ says the CEO of the eponymous dealer group.

He was chatting to us at the end of the second day of business from one of the group’s Porsche dealers in an exclusive video interview, which you can watch above.

Scottish dealers had to wait until Monday before they could open their doors fully to the public – a full 14 weeks of lockdown.

And they’ve had to make the same Covid-19 Secure changes to their sites as dealers elsewhere – Vardy going one step further by installing temperature checking cameras at the entrances to his dealerships, which he shows us in the video.

The dealer group boss tells us that during lockdown the group successfully sold cars online and delivered them – with one salesman in his Aberdeen Porsche dealership selling 100 cars.

He said: ‘Through the lockdown our most successful business was Porsche. I had one sales advisor sell 100 Porsches himself in three months.

‘To be honest with you, I didn’t think that would happen – that’s incredible.’

On Monday, the group sold 160 cars – 40 of which were new – and an average day for the dealer group would be just under 100 units.

‘We were paranoid about not selling enough new cars, he explained.

‘We switched some spend from used into new and we’ve focussed hugely on new cars to create our own part exchanges.

‘BMW and Land Rover sold well, but Vauxhall was quiet.

Vardy said his Car Store used sites were busy too, but he’s managed to stay profitable throughout the lockdown selling cars online via the firm’s Silver Bullet digital retail platform.

He revealed that for the year to the end of June the company has managed to make money and with 1,000 cars sold and £1m of revenue achieved last month, the trend is improving further still.

Vardy said: ‘We have planned a profitable second half of the year because actually to the end of June the company did make money. That’s pure trading.

‘That’s pretty incredible and I’m very proud of the guys for achieving that.

‘For the second half of the year we are assuming the same numbers we had in the original business plan.’

Vardy’s online sales capability has certainly helped. Although, he admits, the firm is still refining and learning the best way to sell online, it is still working well. 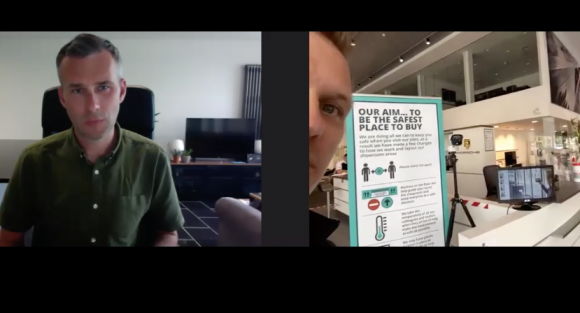 He reveals finance penetration has actually been higher for online sales and with Zoom calls and the ability to share screens with ‘guests’, Vardy’s fond name for his customers, his sales team are converting customers.

‘I don’t want to sound smug and say I saw what was coming with the digital thing, but I had seen enough businesses around to give me a proper bash on the head to think carefully about it,’ said Vardy.

‘About five years ago I got quite nervous and had a look around. Everyone was selling things a different way and our business was proper old school.

‘That’s why the Silver Bullet thing came along because it was the product we needed.’

Peter has split his team into ‘pods’. One for retention, one for online sales and one for walk in showroom visits each with different targets and pay schemes.

And now he is ‘speeding up’ the roll out of this new sales structure.

He added: ‘We’ve got far more excited about the online sales tool and the development and how we deal with guests online has come on leaps and bounds.’

While dealer groups across the country are making redundancies, Vardy is insistent that he can avoid them by working with staff.

He added: ‘Redundancies would kill our culture. We have worked so hard to get good people that I don’t want to make redundancies short term to recruit again in the future – that won’t work for us.

Vardy’s teams have taken pay cuts to work four day weeks and it’s this way that he has managed to keep all staff employed.

The CEO worked hard to look after his staff during the lockdown too, setting up helplines for staff, sending aid packages to those with newborn children and simply being there if they wanted to talk.

He added: ‘A lot of things we put in place because if we say we are a family business that genuinely cares about its colleagues then that was the time to show it – and that has gone down well.

‘That’s what family businesses are supposed to do and I hope that is the success story of this.’

Now Vardy and his team are focussed on getting back to work and continuing to remain profitable.

‘We’ll now be more turbocharged to make a real difference and ensure we don’t waste this crisis.’