Cars destined for the UK are already being delayed by a container ship that has run aground and blocked the Suez Canal.

Container ships are backing up behind the Ever Given, which ran aground on Tuesday, with every day it remains stuck impacting on goods deliveries worldwide.

Kia told Car Dealer it is ‘aware of delays’ to the deliveries of some cars from its Far Eastern factories. Other car makers have admitted they are also closely monitoring the situation.

Two car transporter container ships – the 57,000 tonne Morning Star and the Hoegh London – are already blocked behind the stricken vessel in the approach to the canal.

Grand Pavo, another car transporter ship, has left Nagoya, Japan, close to where Toyota has factories, and is heading straight for the Suez Canal.

Meanwhile, car transporter Sunrise Ace has left Nakanoseki, a port where various Mazda models – including the 3, CX-5 and 6 – are loaded for global distribution.

Cars made in Japan and Korea are usually transported to the UK via Suez – the more economical route – to ports including Southampton and Tilbury.

Jim Holder, editorial director of Haymarket Automotive, publishers of What Car? and Autocar, said this was a blow the car industry could do without.

He said: ‘The last thing the UK car industry needed was any more disruption, especially just as dealers are about to re-open – but this does appear to be the latest in a long line of issues that threaten to undermine supply and choke back a degree of opportunity from lockdown relaxing.

‘Combined with the semi-conductor shortage and other disruption it does appear that buyers of some cars are going to have to wait longer than they might anticipate – and inevitably that will lead to some lost sales, either altogether or to rival brands, that can be ill-afforded right now.’

Tom Barnard, editor in chief of Electrifying.com, said it’s not just cars but components that are at risk of delay.

He added: ‘There are the obvious potential delays to completely-built cars, but makers will also be concerned about the crucial components which come from the Far East.

‘For example, most electric and hybrid car batteries come from China, Korea and Japan.

‘Any slight delay in delivery could mean the production lines in Europe will grind to a halt.’

A Kia spokesperson said the firm had already been made aware of delays to new car supply due to the grounded container ship.

He told Car Dealer: ‘Currently our stock levels are OK, however we are aware of some vehicles which have been affected by this blockage – none of which come from Slovakia, which makes up around 50 per cent of a model line-up.

‘Currently we’re in no position to state what effect this will have, as it’s unclear when the problem will be cleared.

‘However we’re in a good position with stock levels, so any delayed stock is not likely to seriously affect our national or dealer stock.

‘We will continue to monitor the situation and take appropriate action within our control.’

A spokesperson for Mazda told Car Dealer: ‘Currently none of our cars are stuck in the Suez Canal and we are not anticipating any supply delays.

‘Mazda UK planned for a strong recovery following the Covid Lockdown and our immediate stock coverage both at dealerships and in central compounds is very healthy.’

Suzuki also said it is confident it has ‘sufficient stock’ for dealers when they reopen on April 12 at its Portbury facility.

A spokesperson added: ‘Two further ships have already passed the affected area and we remain in contact with our shipping partner to check on any possible future delays to our Japanese manufactured models.’

Hyundai said its ships had managed to pass through the canal before the blockage occurred and that it wasn’t expecting another until the end of next month. It said its new car supplies were, therefore, ‘unaffected’.

Toyota said so far it had not been affected. SsangYong have also been contacted for comment.

Admiral Osama Rabie, chairman and managing director of the Suez Canal Authority confirmed today that navigation through the Suez Canal has been suspended.

Guy Platten, secretary general of the International Chamber of Shipping, said the canal carries ‘about 12 per cent of the world’s goods’. 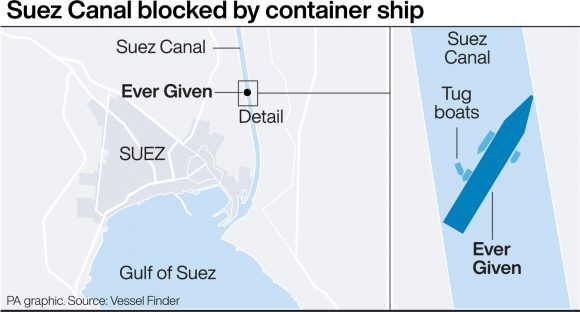 The Ever Given, a quarter-mile long vessel, became stuck in the Suez Canal after high winds reportedly blew her off course.

Two Suez Canal pilots were on board at the time of the grounding.

Eight large tugboats, the largest of which can tow 160 tonnes, are being used to attempt to move the mammoth vessel, the SCA said.

Reports indicate it may not be moved until next week and could cause delays for deliveries to the UK.

The Prime Minister’s official spokesman said: ‘We are working with the authorities to assess the situation, we stand ready to provide any assistance that we can.

‘We have not been approached by any UK companies or organisations with concerns about implications for their shipping plans.

‘However, some goods destined for the UK may be delayed in transit.’ 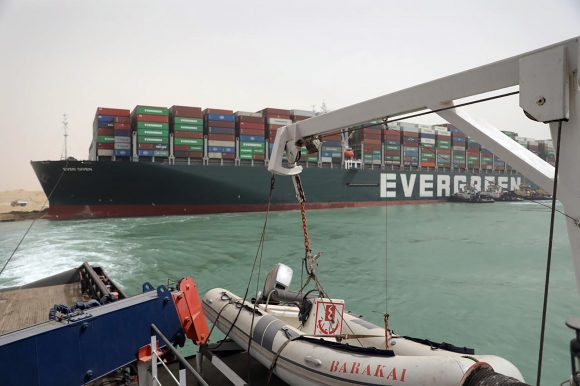 It could take days to refloat the Ever Given

Director of policy at the UK Chamber of Shipping, Peter Aylott, said the timeline for removal of the ship will depend on tide and weather conditions in the coming days.

Aylott, who used to sail ships down the Suez Canal and knows the area well, said: ‘The complication is that the tides are obviously different each day, and we’re working towards a high tide at the end of the weekend which would be the best time to try to refloat it.

‘But the prevailing wind has caused issues with the vessel being stuck to the bank – it’s difficult for the tugs to pull it away.

‘It could take some time, or it could be that by Sunday we see the vessel refloated.’

He said the ship is ‘one of the largest’ to travel on the canal, carries around 20,000 containers, weighs around 220,000 gross tonnes and is around 400 metres long.

‘I think the major issue will be unintended consequences at what’s in the containers, and that will really depend on what’s on board the vessels.’