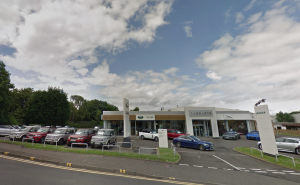 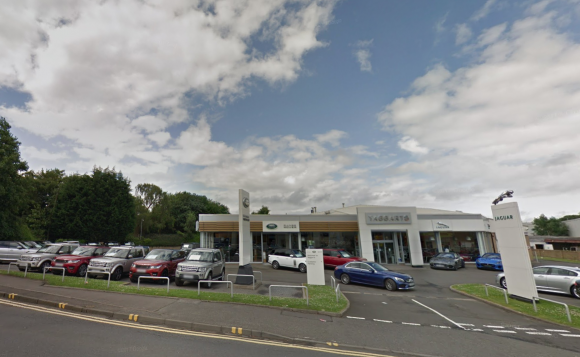 A FIRE which caused approximately £850,000 of damage at a Land Rover dealership in North Lanarkshire was started deliberately.

Police were called to Taggarts Land Rover on Windmillhill Street, Motherwell at around 11.40pm last night following reports of a fire.

Three fire engines were sent to the scene and crews managed to extinguish the blaze within half an hour.

Seventeen cars were damaged in the fire, amounting to an estimated total loss of £850,000.

A joint investigation by the police and fire services resulted in the incident being confirmed as an arson attack.

CCTV footage showed a man climbing the perimeter fence of the dealership and then starting a fire on the forecourt.

Detective Inspector Kenny Dalrymple of Wishaw CID commented: ‘Extensive enquiries are under way to establish the full circumstances surrounding this reckless crime and it is absolutely vital that anyone with information comes forward.

‘We know that the suspect climbed the fence to start the fire and I would appeal to anyone who was in the vicinity of the garage around the time of the incident and may have noticed someone acting suspiciously to get in touch.

‘I would particularly appeal to any motorists with dashcams who were driving along Windmillhill Street between 11.30pm and 11.50pm to contact police, as you may have captured footage which could be important to our investigation.

‘Anyone with information is asked to contact Wishaw CID via 101, quoting incident number 4577 of Wednesday 20 June 2018. Alternatively you can call Crimestoppers on 0800 555 111 where details can be given in confidence.’

A spokesperson for Taggarts commented: ‘We have been informed of the fire at Taggarts Land Rover Motherwell. We will now follow our protocols and processes and consult with the appropriate authorities to assist with their investigation into this incident.

‘We remain open to the public and will provide an update within the next 48 hours. We apologise to our customers for any inconvenience caused.’

MORE: Up to 75,000 Mercedes-Benz cars in UK face recall in fire risk

On WorkshopMagazine.co.uk: Our Kev: It’s a terrible state to be in if there’s no kind of MOT system