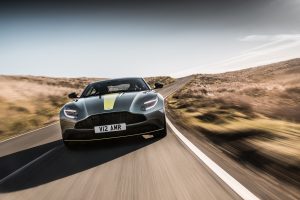 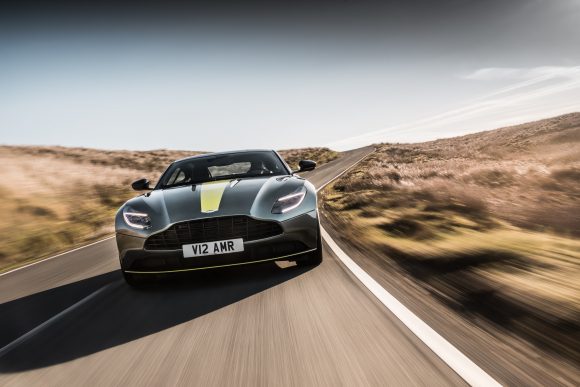 Aston Martin, responding to an increase in rival offerings, has taken its DB11, boosted the output of that car’s V12 engine and produced this – the DB11 AMR. Power has been increased, handling sharpened and exhaust tuned to produce a car more in line with other grand tourers on the market.

The manufacturer has been keen to stress the fact that the DB11 AMR remains a true cross-country cruiser at heart, with new upgrades simply giving it better handling in the corners without diminishing the car’s comfort levels. Has it succeeded? Let’s find out…

There’s quite an extensive list of upgrades that have been made to the AMR over the regular DB11. The most significant is that power upgrade, now 30bhp more than the older car’s 600bhp. The standard DB11 was never lacking punch, but Aston Martin has responded to other, more powerful cars from rival manufacturers (we’re looking at you, Bentley) and thrown some extra horsepower into the AMR for good measure. Torque, however, remains the same at 700Nm.

Aston Martin has also recalibrated the eight-speed automatic transmission for faster shifts, while the chassis has also been reworked to provide better cornering ability without reducing the car’s excellent comfort levels.

Underneath the DB11 AMR’s long, flowing bonnet sits Aston’s glorious twin-turbocharged 5.2-litre V12 engine. It’s a masterpiece of engineering, and is a reminder of just how good these large-capacity units can be in a world where downsizing seems to be reigning supreme. It can power the AMR to 60mph in 3.5 seconds, before pushing it to a top speed of 208mph. It’s a huge amount of performance, and endows this DB11 with a frankly ridiculous turn of pace – particularly for a car of this size.

Of course, economy isn’t going to be a V12’s strong suit. Aston claims that it’ll return 24.8mpg on the combined cycle, while emissions are relatively high at 265g/km when tested under the new NEDC cycle.

One of the main complaints for the old DB11 was that it felt just a little too supple in the bends and lacked the poise that we wanted from an Aston Martin.

However, this criticism has been firmly rectified. The range of tweaks to the chassis now make the DB11 genuinely capable in the corners, with body roll expertly managed and the well-weighted steering adding to the overall experience.

Then there’s the sheer performance of the thing. Press the throttle and there’s an almost undetectable pause while the turbos get going. From there, power is available in spades. The first three gears are practically unusable without threatening your licence, while the whole thing is accompanied by the now-enhanced howl of a V12 – one of the best sounds in the business.

The regular DB11 was always an elegant thing to look at, and the AMR builds upon this. There are a few distinct touches that help distinguish it from the regular car, such as dark headlight surrounds, smoked tail lamps and a gloss black roof. They’re subtle touches, we’ll admit, but they certainly add to the car’s overall look in a positive way.

If subtlety isn’t your thing, then Aston is offering the AMR in three versions of ‘Designer Specification’, as well as a limited-edition model that features a ‘Stirling Green’ and lime livery. It’s certainly not one for shrinking violets, but if it is up your street, be quick – it’s limited to just 100 units worldwide.

The AMR’s interior feels exceptionally well made, with a variety of high-quality materials contributing to a cabin that is just what you’d expect from a prestige GT car. The seats are supportive yet comfortable, while the leather and Alcantara sports steering wheel feels excellent in the hands, both in terms of feel and shape. The wheel is a component sometimes overlooked by manufacturers, but Aston has got it spot-on here.

The central layout of the car remains unchanged over the DB11, and as such stays just a little cluttered for our liking. The Mercedes-sourced infotainment screen isn’t too bad but it lacks the sharpness or definition that we’ve come to expect, while the general button layout could do with simplifying. Though user-friendly enough, the overall feel of the central dashboard section is just a little behind the times.

Prices for the DB11 AMR start at £174,995 and first deliveries are expected in the coming weeks. Though that’s an impressively large price tag, you’re getting an awful lot of engineering and prestige for the money. That V12 is worth the cost on its own, offering up one of the very best soundtracks around, as well as a colossal amount of performance.

Prices for the regular DB11 start at around £160,000, and while we can’t fault that car for the way it drives, we’d struggle to see why you wouldn’t just opt for this AMR version, given its relative closeness in price. It’s a more capable car, and the way it drives is reason enough to pick it.

The DB11 always felt so close to the complete package – and thanks to the tweaks added to the AMR, it now is. The way this car steers, along with the way it can transform from savage performance car one minute to luxurious grand tourer the next, is downright remarkable. Aston has said that the AMR is now the fastest model in its current series production range, and going off this test, it’s easily one of the best, too.