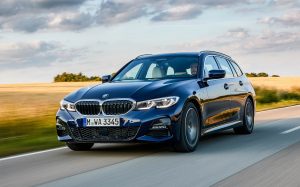 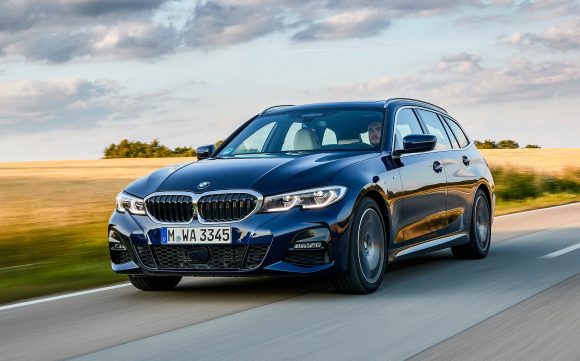 The BMW 3 Series Touring has come to define sporting practicality in the estate segment since it was introduced in the late ’80s. Since then, more than 1.7 million examples of the 3 wagon have rolled off the production line. Now, following the release of the all-new 3 Series, there’s a fresh Touring version. We headed to Munich to try out the current range-topping 330d version.

This new Touring is based on the updated 3 Series, which means it boasts all of the significant improvements that the saloon does. It’s wider, longer and taller than the model it replaces, so can offer more interior space and a better load area size – key elements for any estate car. Meanwhile, there’s a variety of new petrol and diesel engines, along with a plug-in hybrid version due to be introduced next summer.

The car’s chassis has been re-engineered for better handling, and the whole car is lighter than the one it replaces, meaning that not only is it better on fuel, it’s better in the bends too.

This particular 3 Series Touring is powered by a 3.0-litre turbocharged straight-six diesel, which sends 261bhp to all four wheels through BMW’s xDrive all-wheel-drive system. It uses an eight-speed Steptronic gearbox, which handles the delivery of all 580Nm of torque to the road.

Flatten the throttle and the Touring will hit 60mph in just over five seconds, and it’ll carry on accelerating to a top speed of 155mph.

Despite the brisk performance, BMW says that the 330d will return up to 52.3mpg, while emissions are 140-146g/km CO2 depending on wheel size. Our test car rode on adaptive M Sport suspension too, which helps to deliver a comfortable ride and gives the driver the ability to adjust its firmness to their liking.

The wagon has a slightly different suspension set-up to the regular 3 Series (to help when it’s fully loaded), but it still manages to be just as accomplished as the saloon.

The ride is well judged around town, while at speed it becomes even more composed. When you’re travelling more quickly, very little external noise intrudes into the cabin, making it very quiet indeed.

Switch to Sport mode and the throttle response gets sharper, which means that thanks to the hefty supply of torque the 330d picks up and goes with little hesitation. However, in this mode the steering becomes overly weighty and artificial – it feels just about spot-on in comfort mode instead.

The new 3 Series Touring is a sleek evolution of the previous-generation car. In our eyes, the estate version has always trumped the saloon  in the looks department, and we’d argue that  the same is the case here.

Our test cars were finished in a particularly classy blue shade,  with chrome accents that helped to give them  a distinctly premium look.

At the rear of the car you’ll find twin exhaust pipes (on 330d models, that is) which give an indication of the car’s performance.

Although the new 3 is longer than the one it replaces, it hasn’t lost the older model’s spot-on proportions. We would argue that the fake intake vents at the rear of the car don’t add much to the car’s appearance though – if you’re going to add vents, we’re adamant that they should have a function.

The cabin of the Touring is a great place to be, with wide and open architecture, although the relatively high dash means it still feels sporty.

There’s plenty of adjustability too, but the steering wheel is simply far too chunky on the M-Sport trim.
There’s plenty of legroom and headroom in the back, so even taller passengers should be able to get comfortable.

The boot, meanwhile, has been upped in size over the previous-generation car. It’s only been increased by five litres, which isn’t a lot, but it now bumps the total load area to 500 litres, or 1,510 litres with the rear seats folded flat.

This latest 3 Series comes loaded with tech. One of the most popular specifications in the UK will undoubtedly be M-Sport, which features a range of standard equipment including a full aerodynamics package, adaptive LED headlights and sports-tuned suspension.

The new infotainment system is easy to use, too. Standard cars get a 9.0-inch screen, while high-spec vehicles (like our test car) benefit from a larger 10-inch unit.

It’s simple to navigate,  good to look at and incorporates BMW’s latest voice-recognition technology. You can say ‘I’m cold’ and the car will automatically increase the interior temperature. Clever stuff!

Parkers said: ‘Unless that high SUV driving position is essential to you, the 3 Series Touring sets an exceptional standard once again and genuinely offers buyers the best of many worlds.’

The BMW 3 Series Touring builds on the solid foundations made by the saloon and adds a healthy dose of practicality for good measure.

It’s good to drive, quiet, comfortable and well appointed both inside and out.

Although this diesel engine will more likely suit those who drive longer miles, a variety of engines means there’s likely to be a powertrain for everyone – and a plug-in hybrid due next year ticks the electrification box too.

It comes perilously close to being all the car you could ever need – and it certainly felt that way during our initial time with the 3 Series Touring.