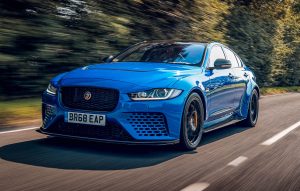 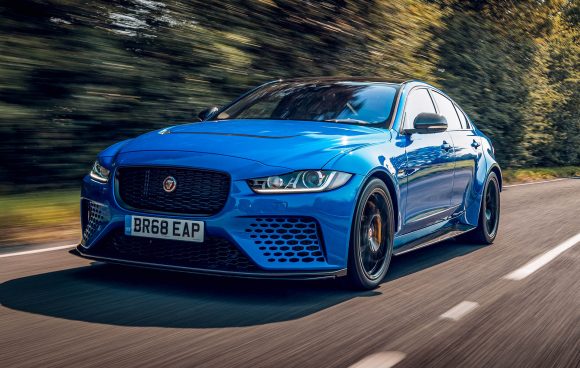 First Drive: Jaguar XE SV Project 8 Touring – it might be mad but we’re glad it exists!

The XE SV Project 8 is a limited-run, flat-out  hard-core version of one of Jaguar’s most well-known saloon cars, packing a 5.0-litre supercharged V8 and a set of dynamics that adhere it far better to a track than motorway jaunts usually associated with the run-of-the-mill five-door on which it is loosely based.

But the big wing and roll cage aren’t attributes that everyone wants on their performance saloon. That’s why Jaguar has released this – the Touring – which deletes the out-there styling characteristics while retaining the same earth-shattering performance. We’ve been out to see what it’s like.

If you thought that the standard XE SV Project 8 was limited in number – just 300 have been produced – then things take another step towards exclusivity with the Touring, as only  15 are ever going to be produced.

As we’ve  already mentioned the key appeal of this model is the fact that it downplays the car’s performance, which could appeal to those who prefer their performance saloon to look a little more under-the-radar.

The performance hasn’t been watered down at all either, although because that rear wing has been removed, the top speed is now a ‘lowly’ 186mph – down from the regular car’s 200mph.

The Touring uses a 5.0-litre supercharged V8 with 592bhp and 700Nm of torque. Together, that manages to push the Project 8 from 0 to 60mph in just 3.3 seconds and, as we highlighted earlier, flat out it’ll manage 186mph. It has an all-wheel-drive system as well to help manage all of that outright power.

When it comes to gearing, that’s sorted by an eight-speed automatic ’box. There’s a titanium exhaust system here too, which gives the Jag an even more raucous note.

There are continuously variable dampers as well, an electronic rear differential and big, effective carbon-ceramic brakes.

Jaguar really has thrown all of its performance know-how at the Project 8, and that seems to be somewhat reflected in its price.

The Touring remains largely unchanged over the standard Project 8, and that’s no bad thing. The experience is dominated by that engine; plant the throttle and you’re met with an otherworldly bellow as the car punches its way through the air in front of you. And because it’s supercharged, you’re only rewarded for however long you keep the right pedal pinned.

But the Project 8 isn’t only accomplished on the straights. In the beds, its stiff suspension combined with aggressive Michelin Pilot Sport Cup 2 tyres mean the car clings on.

A by-product of this is that it’s quite jostly to drive on the road at low speeds, but that’s part and parcel of being a car such as this. The eight-speed gearbox may not be the sharpest, but it switches cogs effectively enough.

The seating position is also excellent; our car came with traditional leather seats, but we tested another regular Project 8 with carbon, fixed-back bucket seats – and we’d definitely choose the latter, as they’re by far the most supportive, even if they aren’t quite as padded.

The regular Project 8 is menacing, and the Touring version still has more presence than most sports saloons. The removal of the rear wing does reduce the look-at-me factor, but that’s the ethos of the model – it’s meant to be a performance car that doesn’t have to shout about it through looks.

The proportions are excellent too; the car has a strong, muscular stance without being overly large. The front section is particularly smart, with its Swiss cheese-style air intakes giving it a distinct visual change over the regular XE.

The interior of the Project 8 does, for the most part, just resemble that of the regular XE – and that feels like a bit of a shame. Yes, it’s been garnished with plenty of carbon-fibre trim pieces, but for the most part it’s regular Jaguar. We’d like to have seen the latest dual-screen set-up fitted to other Jaguar Land Rover cars used here – particularly given the car’s circa £160,000 price tag.

The rear seats are comfortable and spacious, and there’s a decent-sized boot too – so this is a performance that you really could use every day.

The Project 8 gets all of the luxury items that you’d expect. There’s satellite navigation, air conditioning and a full speaker system, all combining to help make a car that’s comfortable to simply sit in and drive around like a usual saloon.

As we’ve mentioned, the carbon-backed sports seats are the ones we’d be choosing if we had the option – they’re brilliantly supportive  and actually help to make the car feel a little  more special inside.

It doesn’t feel lacking in creature comforts but, as we’ve mentioned, it’s just not a cabin that seems all that special, and given the presence the car has from the outside, that’s a bit of a missed opportunity. Unfortunately, too, all Project 8 models are left-hand-drive only. Although some buyers might not be bothered by this, it is a bit of a pain here in the UK.

Autocar said: ‘A big part of the XE SV Project 8’s appeal is that powerhouse of a supercharged V8.’ Pistonheads said: ‘Special mention must go to  the suspension and its infallible ability to retain total composure.’

The Project 8 Touring is an attractive prospect. Certainly, any car with close to a 600bhp V8 engine under the bonnet and proper mechanical upgrades gets our vote – it just struggles when you consider it within a wider context. It’s a great showcase of what Special Vehicle Operations can do – we just hope it trickles down into cars that more people can buy, and therefore enjoy.