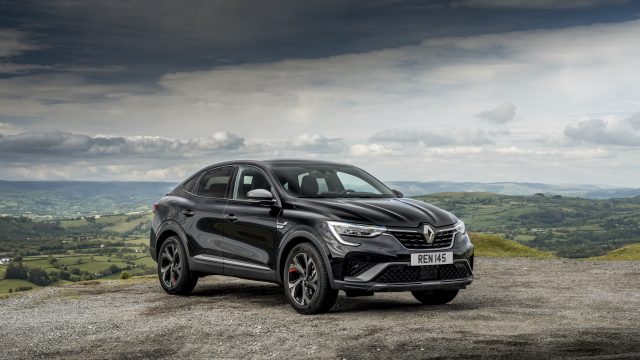 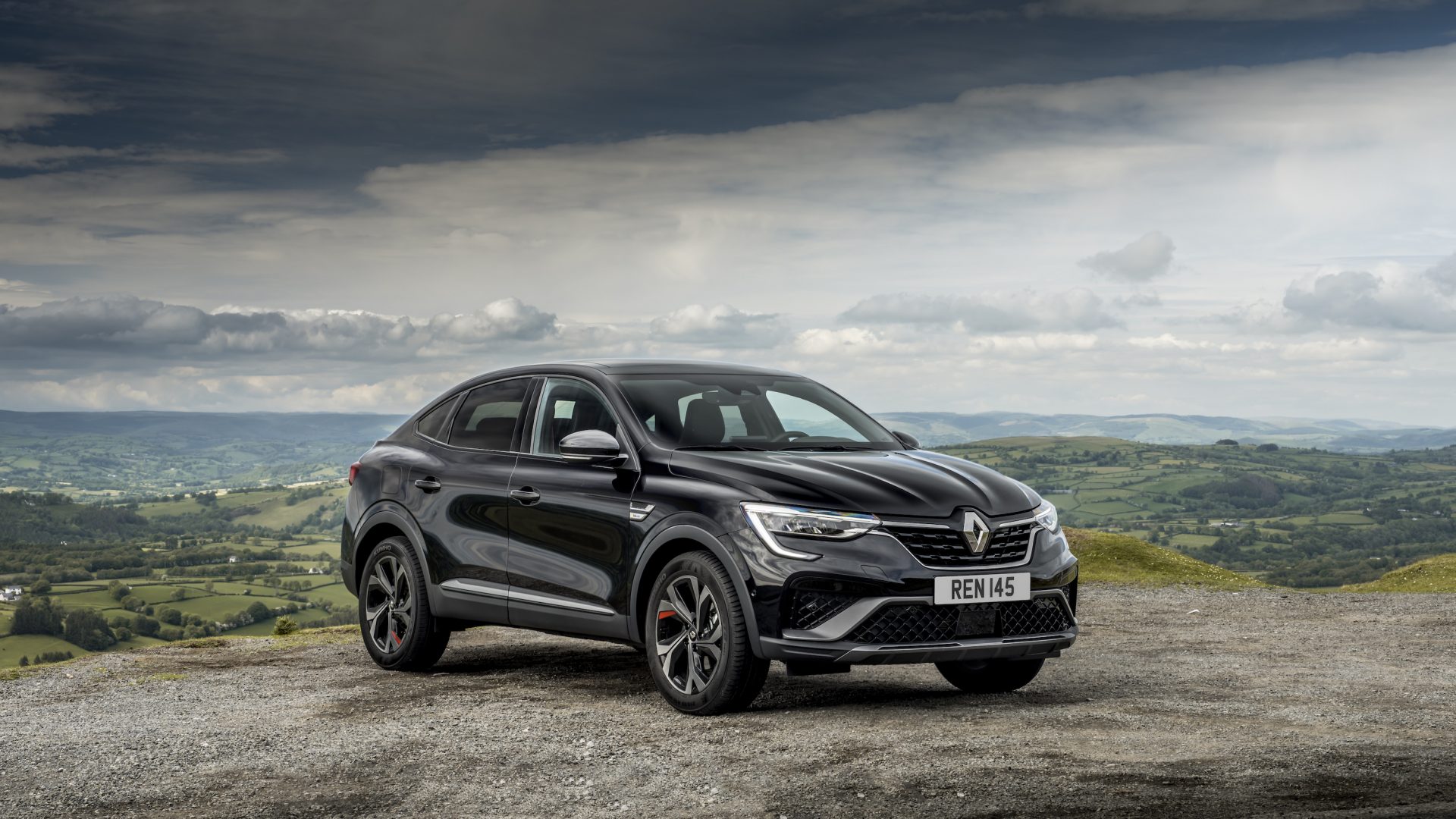 The new Arkana takes Renault into uncharted waters. Is it a success? Ted Welford finds out

Renault has been slow to tap into the niche coupe-SUV market, but with its Captur and Kadjar SUVs outselling the Clio and Megane, the manufacturer thought it was time to expand a little.

The Arkana aims to offer some of the style of the BMW X4 and Mercedes GLC Coupe, but in a cheaper, more affordable package.

If the Arkana name seems vaguely familiar, it’s because this is a nameplate that has already been in use on a model produced solely for the Russian market since 2019.

While this European version might look similar, Renault says 95 per cent of it is new.

For starters, it sits on a completely different platform (the same as that used on the latest Clio and Captur), and will be available purely with hybrid powertrains – being the first Renault to do so.

It also gets the same range of impressive technology and safety assistance features as elsewhere in the Renault range.

The Arkana will have a mild-hybrid 138bhp 1.3-litre petrol kicking off the range, although our test car was the ‘full’ E-Tech hybrid, which is expected to account for two-thirds of sales.

It’s the same setup as found in the Clio E-Tech, combining a new 1.6-litre petrol engine with twin electric motors and a 1.2kWh battery. Power is sent to the front wheels via a ‘clutchless’ automatic gearbox, too.

The total power figure is 143bhp, allowing the Arkana to reach 60mph in 10.6 seconds and hit a top speed of 107mph. But it’s the efficiency that impresses – also helped by the sleek styling – with Renault claiming 56.5mpg on this R.S. Line test car, along with low CO2 emissions of 108g/km. 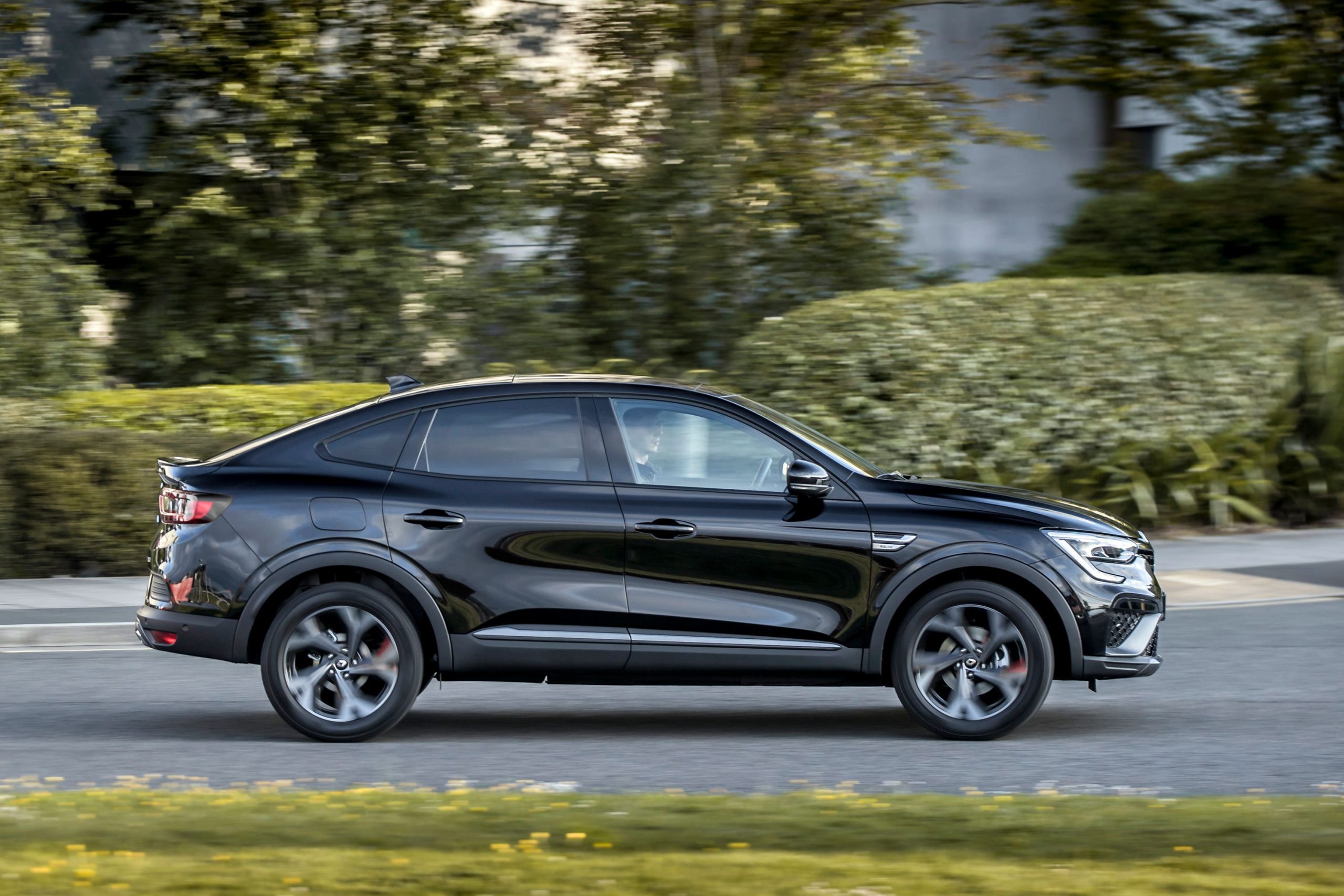 What stands out here is just how much time the Arkana can spend running on electricity.

While other hybrids can only travel as an EV at very low speeds and when decelerating, you’ll notice this Renault quite regularly is running in electric mode when driving even at higher speeds.

The system itself is largely smooth, although it does have the occasional clunkiness to it, and it’s not what you’d call quick.

It also handles well, with precise and well-weighted steering offering more in the way of involvement than many crossovers in this class.

On our top-spec car’s 18-inch alloy wheels, the ride did have quite a firm edge to it, but it was by no means uncomfortable. For maximum comfort, a lesser trim with smaller rims is likely worth choosing

Coupe-SUVs always divide opinion – not helped by questionably styled cars such as the BMW X6 – but we reckon the Arkana is a really attractive thing.

It gets the same familiar Renault front end as the Clio and Captur, with sharp C-shaped LED lighting and a neat grille with the brand’s bold emblem, while R.S. Line models get revised bumpers (inspired by Formula One, we’re told).

But it’s at the rear where things start getting different and the ‘coupe’ aspect comes into play.

The roofline drops away from the middle B-pillar and slopes into a small ducktail-like spoiler.

From this side profile – to our eyes at least – it’s a properly striking-looking car, which arguably looks better than far more expensive coupe-SUVs from the more premium brands. 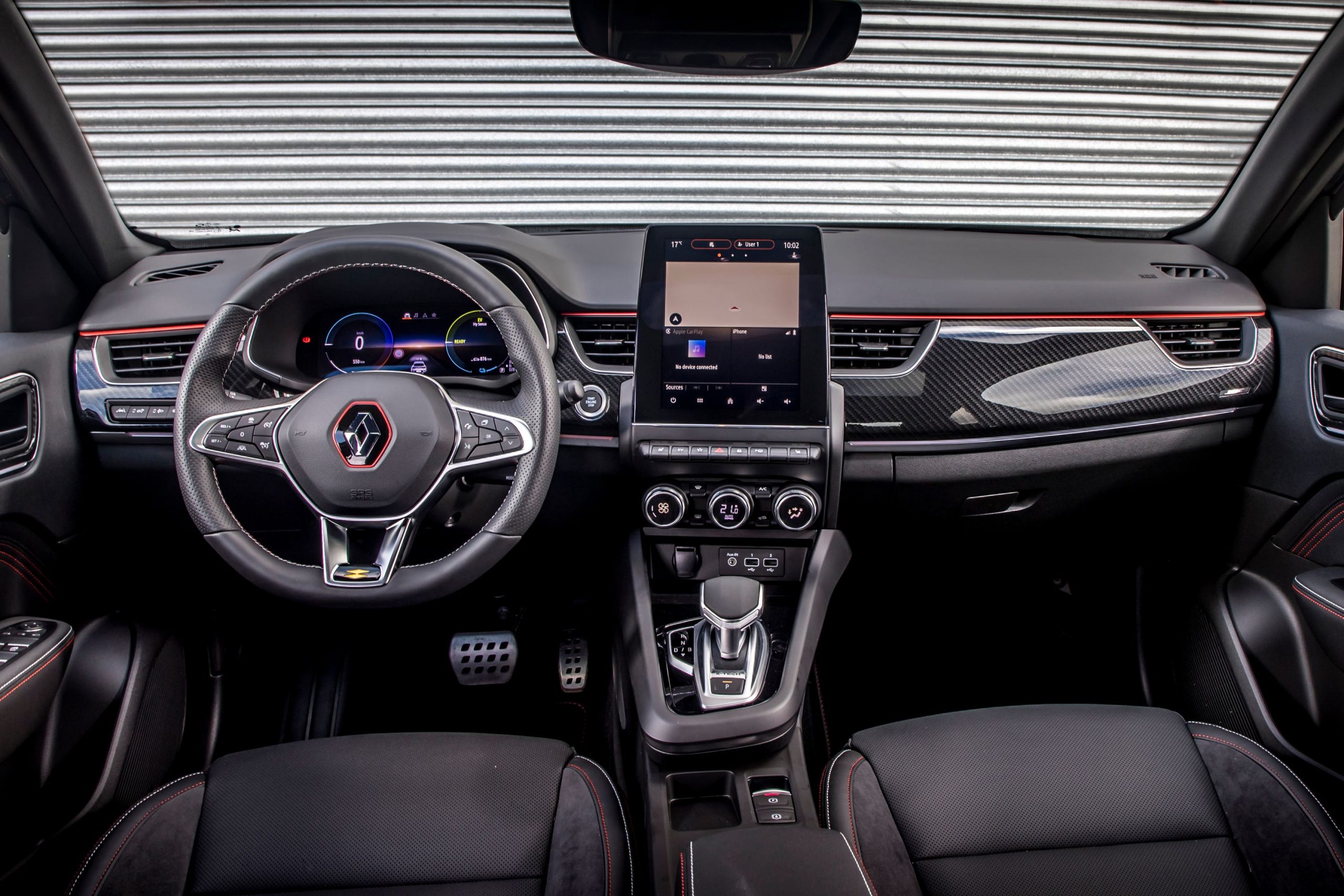 If you’re familiar with the latest Renault models, nothing about the Arkana’s interior will come as a surprise.

That’s no bad thing, as the French firm has really stepped up its game in the past couple of years, with a large touchscreen and digital dial system dominating the cabin.

The quality throughout is also largely good, while sporty touches on our R.S. Line test car really helped to add additional flair to the interior – highlights including carbon-effect trim, red accents and Alcantara-trimmed seats.

The Arkana also gets away without the usual practicality misgivings that you get with coupe-SUVs, with no real compromise when it comes to rear seat space.

The 480-litre boot in this E-Tech model is significantly larger than that of the Toyota C-HR – the car Renault reckons is the Arkana’s main rival – and it doesn’t feel any less spacious than the more conventional Renault Kadjar crossover. 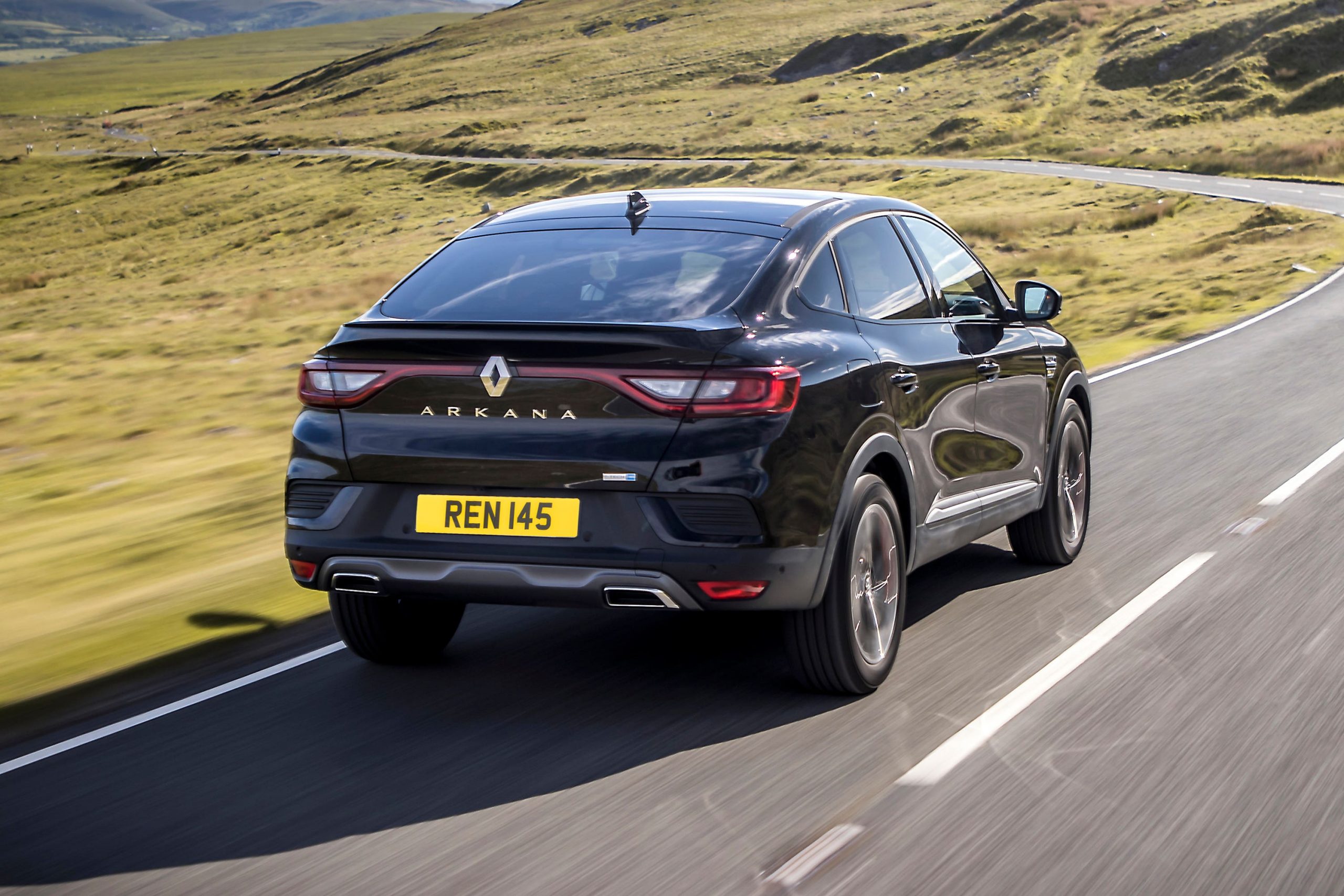 Prices for the Arkana kick off from £25,300 for the mild-hybrid, although we can see why many punters are set to choose the full hybrid version, as it’s only £1,000 more expensive.

S Edition versions bring a host of additional safety technology, along with a larger 9.3-inch touchscreen and a range of multi-sense driving modes.

At the top of the range, the R.S. Line gains larger 18-inch alloy wheels, along with a sporty styling kit inside and out, as well as electric and heated front seats and a heated steering wheel.

The only disadvantage is that range-topping models cost more than £30,000, which just starts to make the Arkana look a bit pricey.

The Renault Arkana is certainly a welcome addition to the crossover market, bringing a healthy dose of style to this class thanks to its coupe-like styling, while the hybrid model is smooth and very pleasant to drive, too.

Perhaps more impressive is the near uncompromised practicality that sets it apart from other coupe SUVs.

It’s a rare case of a car having substance to back up its style, and for that reason alone it’s worth considering next to your more run-of-the-mill family crossovers.