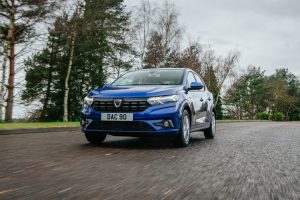 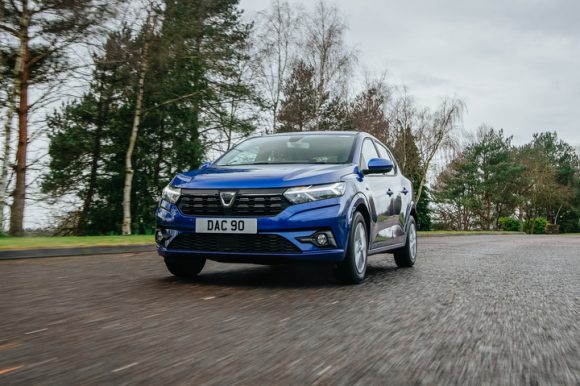 Dacias are renowned for their value, but it’s usually from noticeable cost-cutting. Can this new second-generation Sandero change that? Ted Welford finds out

In a world that’s seemingly obsessed with being ‘premium’, Dacia has proven just how successful making cheap no-frills cars can be, with the Renault-owned brand clocking up nearly 200,000 sales since being introduced to these shores in 2013.

And it’s the Sandero that has contributed to the bulk of that – a model that found fame from James May’s quips on Top Gear and for being the UK’s most affordable new car. Back in 2013, It tipped the scales at just £5,995. Today, with inflation and all that, it’s still available with a shiny 21-plate for just £7,995 – less than half what a new Fiesta or Corsa would cost you.

But the trouble with the Sandero was that while it was cheap, it certainly felt and looked that way. But can Dacia change that with this new model? Let’s find out.

While being lambasted as a 10-year old Clio in the past, no such criticism can exist today, with the new Sandero sitting on Renault’s CMF platform, which has barely been seen in the latest Clio and Captur for 18 months.

That platform allows for some big changes in terms of technology, safety, spaciousness and road manners. But despite this, the Sandero remains incredibly cheap still – being available from under £8,000, and comfortably retaining its title as the UK’s cheapest new car. 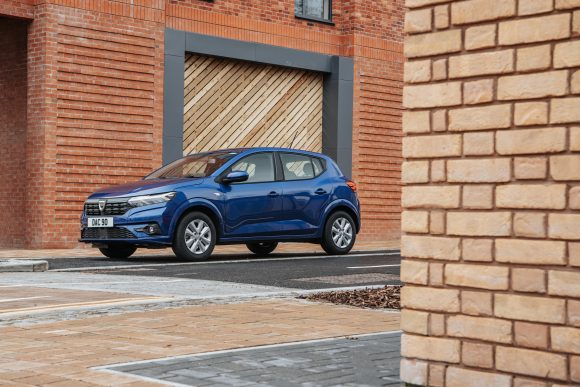 With Dacia yet to find a way to make electrification affordable for UK buyers, the Sandero sticks with traditional petrol engines here.

Kicking off the range is a first-car-friendly 1.0-litre naturally-aspirated petrol unit, though with such tepid performance, the step up to the turbocharged options is recommended, with the TCe 90 or TCe 100 Bi-Fuel available.

It’s the latter that was in our test car, and is an interesting option as you can run it on both petrol and LPG, with Dacia being the only firm to offer this from the factory. You’re probably wondering what’s the point? Well, a litre of LPG costs 65p – roughly half what it costs for a litre of unleaded. While it’s thirstier to run on LPG (38.9mpg compared to 52.3mpg on petrol), CO2 emissions are much lower with the biofuel (109g/km rather than 123g/km with unleaded).

You can flick between the two fuels at a simple press of a button, with no real change in performance detected, and combined they allow for an impressive 800-mile range.

Behind the wheel, the Sandero is improved in virtually every area – no longer feeling cheap and backward to drive like its predecessor, but on par with most in this class.

Though it won’t rival a Fiesta or Mini for driving pleasure, its combination of light steering, a comfortable ride and decent refinement at slower speeds mean it will be very easy to live with while good visibility throughout adds to the appeal. The LPG fuel model is also rather attractive, not least with the fact it costs a minimal £400 more than a standard petrol model, while bringing lower running costs.

Dacia has also introduced an automatic option for the first time, too, with buyers able to choose this on the TCe 90, but not the Bi-Fuel tested here. 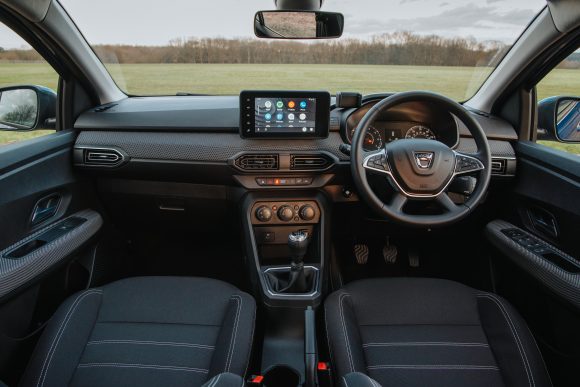 While the Sandero’s design won’t get heads turning, it’s certainly a far more attractive design than before – thanks to a lower roofline, wider-looking wheel arches and also new LED headlights, which have an almost Volvo-like signature about them.

It’s also slightly wider than its predecessor (if no longer), while a new production technique helps to reduce some of the rather noticeable panel gaps you found on this predecessor.

If you want something a little more stylish, there’s always the Stepway model – bringing a more rugged design thanks to its raised ride height, roof rails and plastic body cladding.

In previous times, the Sandero’s cabin had the same visual appeal as the inside of a wheelie bin, and it wasn’t much better to feel either. So this is one impressive revamp, which makes it seem far more ‘Renault’ than ‘Dacia’ inside, and that’s certainly a good thing.

The materials are improved throughout, while a new fabric dashboard is an appealing new addition. Top-spec versions also benefit from a simple-to-use eight-inch touchscreen, which also features satellite navigation and smartphone mirroring.

Clever packaging also means the new Sandero offers class-leading levels of rear legroom, which will be plentiful even for taller adults, while a 328-litre boot is larger than that of the Corsa or Renault.

If you want to make the most of that £7,995 starting price, you’ll need the sparse Access model. It doesn’t even get a radio or painted bumpers, though it does get more kit than before – such as LED headlights, autonomous emergency braking, electric front windows and a speed limiter. There’s also a clip you can plug your smartphone into, too. That said, you can get behind the wheel for just £99 per month with a sub-£1,000 deposit. Some will spend more on their glossy new iPhone each month…

For another £1,000, you get the Essential bringing body-coloured bumpers, cruise control, air conditioning and DAB radio and Bluetooth. But most buyers are expected to go for the top-spec Comfort model (costing from £11,595). This actually gets plenty of kit, including keyless entry, a reversing camera and the large touchscreen we’ve already mentioned.

One area where the Sandero continues to fall short, though, is safety. Euro NCAP described the model’s systems as ‘basic’ with ‘shortcomings’ – awarding it just two out of five stars. 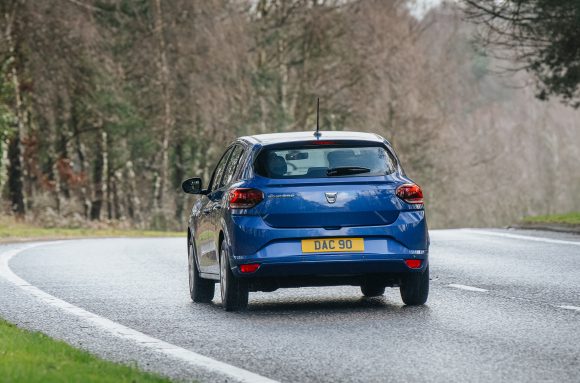 In previous times, buying a Dacia would come with compromises – quality and driving dynamics, for example. But buyers would be happy to make those sacrifices because of the price.

But now with this new Sandero, you can buy it without having to accept any compromises, perhaps with the exception when it comes to safety, which buyers should think about. It’s now decent to drive, has a pleasant interior, and providing you skip the entry-level grade and engine, gets all the kit you could really need.

Even despite safety shortcomings, how Dacia has managed to keep the price the same as before is truly remarkable. Style-obsessed buyers will continue to look elsewhere, but any punter choosing a car with their head – and gloating in the fact a like-for-like Sandero is £6,000 cheaper than a Fiesta – will reap the benefits each and every day.