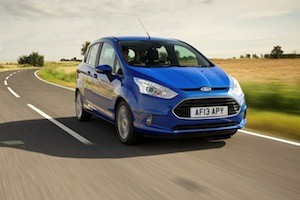 THE Ford B-Max is Britain’s fastest-selling used car for the second month in a row.

Peugeot’s 307 SW followed in fourth position with an average selling period of 34.6 days, ahead of the Citroen’s C4 Picasso at 36.1 and the Volkswagen Eos at 36.2 days in fifth and sixth position.

The Mitsubishi Lancer came in at seventh with an average of 36.3 days to sell, while Jeep’s Patriot and Audi A4 Cabriolet were close behind in eight and ninth with 36.5 and 36.6 days.

Kia’s Sportage rounded up the top ten taking an average of 36.7 days to shift from the forecourt.

Glass’s chief car cditor, Rupert Pontin said: ‘This month sees a really interesting top ten. B-Max in the number one slot confirms the popularity of what is an extremely flexible family car – it’s in short supply and with great demand for the ground-breaking design, it’s no surprise that it’s been this month’s most popular car once again.

‘It’s interesting to see off-roaders still largely in play. Four out of the top 10 models are 4x4s and with the Audi Cabriolet and Volkswagon Eos, there is a definite suggestion that the seasonality of these vehicles is almost gone. 4x4s have been very popular throughout the entire summer, despite the great weather, which is not the norm.’

He added: ‘The Kia Sportage in tenth place supports the continued reports of a strong lower end to the 4×4 market. These are well built, great to drive and very popular, meaning they sell very well and are in short supply.’

This follows the announcement that the Ford B-Max topped the charts for the best selling used car last month.

Pontin added: ‘The Mercedes R-Class is around in greater numbers at the moment which reflects the tactical activity two to three years ago when this model was pushed into the market on low rate leasing and finance deals. This could be a sign of things to come bearing in mind how many deals there have been on Mercedes product in the last year. S-Class is a similar case to the R-Class. High volume means a slow-down in days to sale with price clearly the defining factor to get these sold. This is a shame as generally speaking the S-Class is a market leader in product terms.

‘Nissan Leaf dwells in the last 10 once again reflecting the limited market for EVs at the moment. In the grand scheme of things this is an excellent car. Once there are more charging points the future of EVs may well be very different.’