Home > News > Ford EcoSport to get new look, four-wheel drive and a European production base 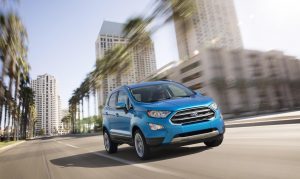 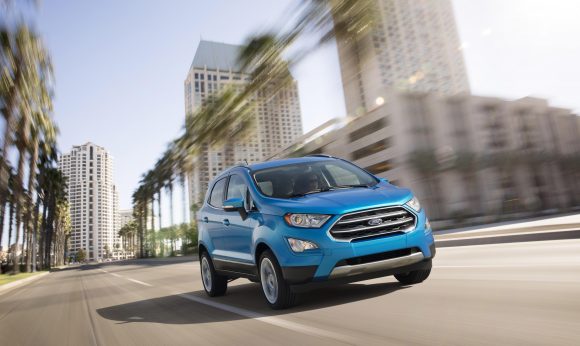 Ford EcoSport to get new look, four-wheel drive and a European production base

THE Ford EcoSport is to receive its most comprehensive facelift yet, bestowing the compact crossover with a fresh new look, improved quality and the option of four-wheel-drive.

UK-bound EcoSports will also be made in Europe for the first time, with production moving from a plant in Chennai, India to Craiova, Romania in a bid to cut down on customer lead times and improve build quality.

It’s likely that the look of the updated model will echo that of the US-market EcoSport – revealed at last year’s LA motor show. Expect exterior styling closer to that of the Kuga and Edge, and interior elements like an eight-inch touch screen with SYNC3 as seen in the new Fiesta.

A Ford spokesman revealed that cars bound for the UK are likely to get some additional styling tweaks all of their own too, with additional contrasting colour combinations and the illusion of a ‘floating’ roof thanks to colour-coordinated pillars.

It’s hoped that the changes will address some of the shortcomings of the outgoing car, launched in 2014 and quickly facelifted earlier this year to not entirely universal acclaim.

Additionally, the changes will help distance EcoSport from the soon-to-be-launched Fiesta Active crossover – a standard Fiesta with raised ride height and additional plastic body cladding, if no increased off-roading ability.

‘We think the customers are quite different,’ Ford of Europe lead engineer for Fiesta, Seamus McDermott, explained. ‘So in the EcoSport, you’ve got the option of the all-wheel-drive coming out later as well, but the Active is a different flavour of Fiesta.

‘The EcoSport is more of an SUV, while the Active is more of a crossover if you like. We’re just giving the customers more options.’