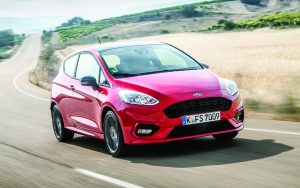 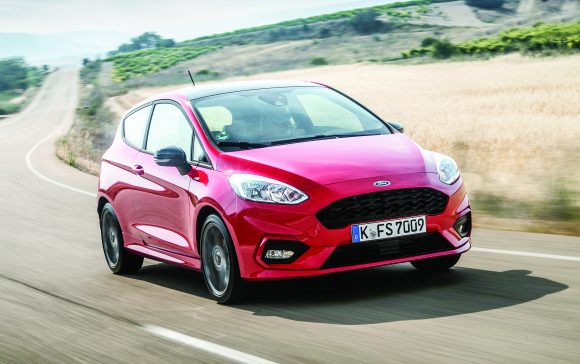 Is this the most important new car of 2017? Quite possibly. The Blue Oval’s second-smallest model has been the annual best-

selling car in Britain since 2009, and has consistently appeared in the top 10 since it was launched in 1976. The Fiesta’s position is under threat, though, with the market for more premium-badged competitors such as the Audi A1 and DS 3 growing ever stronger. Ford’s answer is to fight back with arguably the plushest Fiesta yet, complete with oodles of new technology and a top-spec Vignale model that tips the scales at an eye-watering £19,345 in its cheapest guise.

There are three engines in various states of tune – turbocharged 1.0-litre petrol and 1.5-litre diesel from the previous Fiesta, and a new 1.1-litre petrol for entry-level cars. For the first time ever in a non-ST model, the Fiesta gets a six-speed gearbox too – a newly designed, super-efficient six-speed transmission in 1.0-litre cars, while the higher-powered 118bhp diesel borrows a different six-speed gearbox from the previous Fiesta ST.
We drove the most powerful 1.0-litre, and although it’s now pulling around a chunkier car than before, 138bhp in a Fiesta is still more than enough power to have some fun.

There’s no hiding that Ford is pushing the Fiesta into more premium realms, with more tempting options – though many are limited to higher trim levels than you might like. Ford’s SYNC 3 infotainment system is – thankfully – standard on all but the entry-level Style trim, but you’ll need to pay extra for the larger eight-inch touchscreen rather than the standard 6.5-inch set-up. DAB is standard on all but the Style model too, while navigation is standard on Titanium trim and above, or a £300 option on Zetec and ST-Line. Going even further with the premium add-ons, Ford has swapped the Sony-branded audio system of the old car for one designed in collaboration with B&O Play – an off-shoot of Bang & Olufsen. Opt for this and you’ll get 10 speakers rather than the usual six – including a subwoofer hidden in the boot.

The Fiesta’s party piece has traditionally been the way it handles, with a playful character and the kind of poise and precision you wouldn’t expect in a £12,000 supermini. Go for the ST-Line trim with its lowered suspension and specially tuned power steering and you’ll find the Fiesta’s character remains very much intact, with a set-up that broadly favours fun over outright comfort.

Autocar said: ‘This is a very good car, but not without its downsides.’ Auto Express said: ‘Ford has delivered a car that’s in strong contention for class honours.’

As an overall package, the Fiesta is as impressive as ever – a practical, affordable small car that’s more fun to drive than it really ought to be.