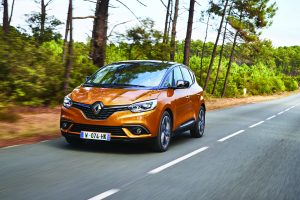 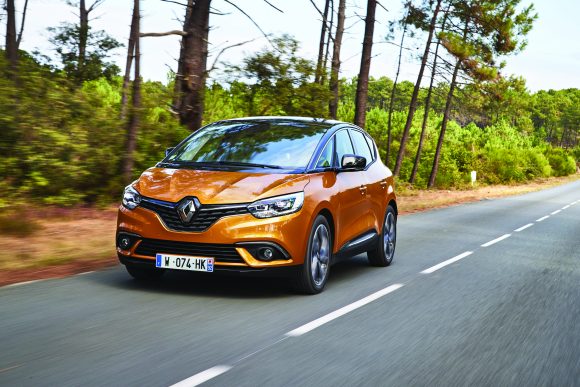 Distinctive, good-looking and practical – no, not our expert tester James Fossdyke but this ‘apres SUV’ from Renault . . .

Renault has described the new Scenic as an ‘apres SUV’, for people who don’t actually want an SUV but fancy the looks and practicality of one. Many customers will be the sort of people who would otherwise opt for a Citroen C4 Picasso or a VW Golf SV. Nevertheless, the car gets some SUV-like styling. There’s plenty of ground clearance, a high beltline and plastic body cladding that hints at ruggedness. Twenty-inch alloys come as standard.

Our test car was powered by a 1.2-litre TCe 130 engine, which is effectively the same unit found in basic Nissan Qashqais, but

the most popular powerplants will probably be the 1.5- and 1.6-litre diesels on offer. They boast power outputs of 109 and 128bhp respectively, and the former returns as much as 72.4mpg. If you need more economy, there’s a Hybrid Assist option.

Entry-level Expression+ models cost just shy of £20,000 and you get plenty of kit. Safety systems such as autonomous emergency braking and cruise control are all standard, along with two-zone climate control, automatic lights and wipers, a seven-inch touchscreen infotainment system and, of course, the 20-inch alloys. Moving up to the Dynamique Nav model adds parking sensors, chrome detailing and a sliding centre console with USB ports. As the name suggests, you also get satellite navigation courtesy of Renault’s R-Link 2 infotainment system. Further up, the Dynamique S Nav gets a larger touchscreen, a Bose sound system and a rear parking camera, while the top-of-the-range Signature Nav gets leather upholstery and electric front seats.

You might expect the tall, high-riding Scenic to be a bit wallowy and vague, but not a bit of it. The steering is heavier than you might expect, but in a good way. It doesn’t make a fuss of cornering, either, displaying impressive levels of body control and grip for a car so tall. It’s by no means perfect, though. Our test car’s 128bhp 1.2-litre engine was just about punchy enough and offered good refinement, but it struggled slightly on the economy front.

Autocar said: ‘If you’re after a distinctive yet practical family holdall, then the Scenic should definitely be on your shortlist.’

For some reason, French manufacturers seem to have a knack of making brilliant family cars, and this is yet another. The Citroen C4 Picasso, VW Golf SV and Ford C-Max now have another worthy rival to contend with at the top of the mid-size MPV market.