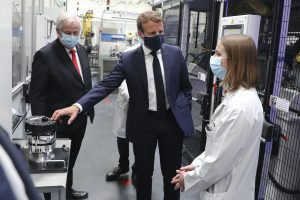 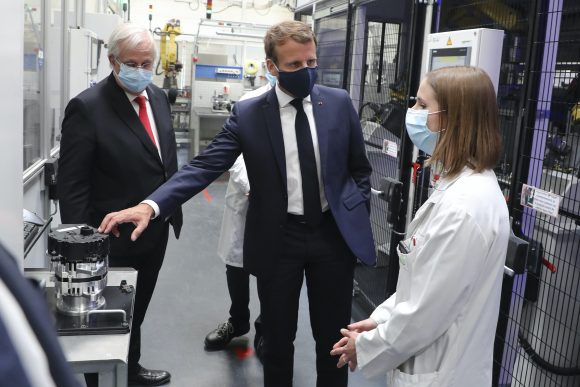 President Emmanuel Macron wants France to become a leader in manufacturing electric vehicles as the government hands over £7.1bn to save the country’s car industry.

The government wants to use the crisis to make France the number one producer of electric vehicles in Europe.

From Monday, car buyers will get up to 12,000 euros (£10,669) from the government for buying an electric car under the ‘historic’ plan unveiled yesterday.

Buyers will be encouraged to scrap their old cars and buy lower-emissions models.

Macron said: ‘Our country wouldn’t be the same without its great brands – Renault, Peugeot, Citroen. We need not only to save (the industry) but transform it.’

The president said the car industry faced an ‘unprecedented crisis’ with production plunging more than 90 per cent.

Macron set a goal of producing one million electric cars in France by 2025, adding: ‘Our country should embody this avant-garde.’

Macron’s plan does not include a £4.45m French government loan guarantee under discussion for struggling Renault.

Macron said the Renault loan guarantee is contingent on keeping open two key French factories. The car firm is expected to announce a £1.78bn cost-cutting plan to unions this week.

The French president met industry representatives and unions at the Elysee presidential palace yesterday morning, then announced the investment plan on a visit to supplier Valeo, which makes equipment for electric cars, at its factory in northern France.

France’s car industry employs 400,000 people and is a big part of its manufacturing sector.

The plan to support the industry comes at a crucial time for Renault, which came into the virus crisis in particularly bad shape after the 2018 arrest of its long-time chief executive Carlos Ghosn.

Renault and Nissan have scheduled an announcement today that is expected to address the future of their alliance.

Bailouts in the country a decade ago included a government bonus plan that encouraged consumers to buy newer cars, though that did not prevent thousands of job cuts.

Is a scrappage scheme more likely in the UK now France has unveiled huge support package for its car industry?