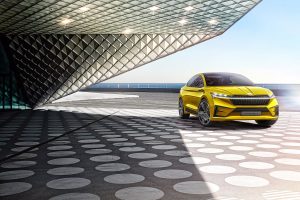 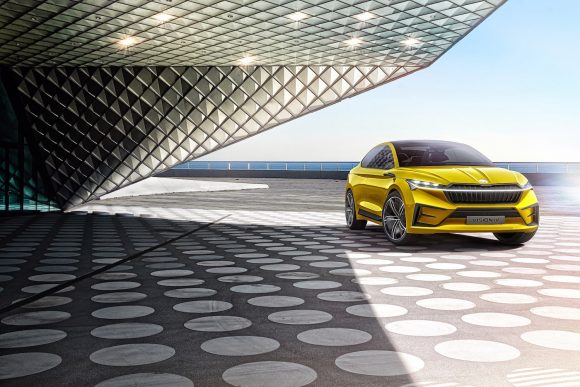 AS A step further towards its first electric vehicle, Skoda has revealed its Vision iV concept.

The ‘crossover coupe’ is a preview of the Czech brand’s first EV, which will be based on the Volkswagen Group MEB electric modular platform.

Powered by two electric motors – one mounted on each axle – the Vision iV comes with all-wheel drive and has a claimed range of 310 miles from its 83kWh Lithium-ion battery. The power bank is also fast-charge compatible, as it takes just 30 minutes to replenish the battery to 80 per cent from flat.

With the powertrain installed, the iV has 301bhp at its disposal – allowing it to get from 0-60mph in 5.7 seconds and reach a top speed of 111mph.

The coupe-like SUV concept comes with a single light strip across the grille that connects the main headlight units and it doesn’t even have any door handles – with Skoda saying the doors will open automatically just by touching them.

Finished in ‘Ultra Yellow’, the iV sits on 22-inch alloys that have illuminated Skoda lettering on each wheel.

Skoda has also replaced conventional wing mirrors with side-mounted cameras that relay the images to the rear-view mirror – making a 180-dgeree view.

The iV comes with level 3 autonomy, meaning it can drive itself at motorway speeds and only require driver intervention in the event of an emergency. With the this driverless setup, the iV will communicate with surrounding vehicles and infrastructure so it can navigate responsibly.

Skoda has also aligned the car with smartphone technology, as the iV can be unlocked by your personal device. The ‘floating’ infotainment display can also be operated by gesture controls and comes with a permanent 5G connection to provide the latest traffic and weather updates.

Without a conventional transmission tunnel, the cabin appears to be quite spacious – with the swivel seats finished in a suede-like material that is comprised of recycled fabrics.

The two-spoke steering wheel also comes with floating elements that control the car’s driving modes. There’s also room for two smartphones on the wireless charging pad in the centre console.

There is no word on when a production version will arrive, but Skoda says the iV offers a ‘concrete preview’ of its first MEB-based model.