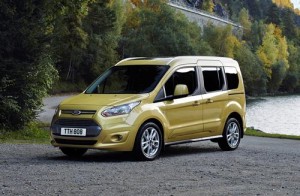 It might look like a van, but it’s safe to say it definitely isn’t one. Following the launch of the original Tourneo back in 2002, the all-new range consists of the five-seat Tourneo Connect and the slightly larger seven- seat Grand Tourneo Connect. It’s based on the Transit Connect with additional rear seats and windows transforming it into a spacious and practical MPV. It’s designed to combine Ford’s modern people carrier looks with its high-quality reputation for robust commercial vehicles.

The choice of three engines, including Ford’s direct-injection 99bhp 1.0-litre petrol EcoBoost unit or the latest fuel- efficient 1.6-litre 113bhp TDCi diesel variant. The 1.0-litre petrol does seem to struggle carrying the extra weight and needs to be worked harder as a result, but there is a decent amount of pull through the rev range and its smooth six-speed gearbox makes it easy and effortless to drive. The fact it only produces 116g/km of CO2 and has a combined fuel economy of roughly 64mpg, means drivers can travel further for less. Finally, there’s the 1.6-litre petrol, which comes with an automatic gearbox. Sadly, this is a little more frustrating to live with.

Ford has kept the Tourneo Connect as basic as possible so it can take a battering from today’s hectic lifestyles. The Zetec trim is expected to be the most popular specification when coupled with the diesel unit, which is set to make up a predicted 90 per cent of all sales. It comes equipped with air-conditioning, automatic headlights and window wipers, Bluetooth connectivity and DAB Radio.

Although the Tourneo is a large MPV and certainly looks bigger than a number of its rivals, it actually feels surprisingly small and easy to manoeuvre. The steering is impressively firm and feels planted on any road. When it comes to running costs and practicality, the more refined diesel unit is arguably the better option and has the extra torque to pull the additional weight – especially when you have a small kayak in the back.

WHAT DO THE PRESS THINK OF IT?

The boys at Top Gear Magazine said: ‘It might lack the outright sophistication of its B-Max or C-Max relatives, but it drives well despite its van platform, is refined and handles much like them – albeit – with a touch more body roll.’

The Tourneo Connect isn’t the most exciting MPV on the road, but it’s certainly one of the more practical buys. It is basic, easy to drive and it’s cheap compared to rivals. Perfect for those looking for a fuel-efficient workhorse that’s easy on the wallet.