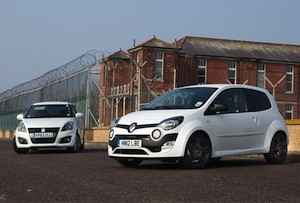 News road test of the year

THE small pocket rocket market is well and truly back thanks to these two contenders. Leon Poultney reports.

They are a pair of mighty minis that pack 1.6-litre, naturally aspirated engines that are designed to put a smile on the face of commuters up and down the country. Both cost just shy of £14,000 and both boast the kind of handling prowess that wouldn’t look out of place at your local karting centre. Granted, the Twingo RS is the more ‘hardcore’ of the two with its chunky bodykit and figure-hugging bucket seats but what the Swift Sport lacks in sporty appearance it more than makes up for in the practicality stakes.

Both cars feature a 1.6-litre, four-cylinder petrol unit that’s mated to a manual gearbox. The Swift Sport’s ‘box possesses an extra gear that makes motorway journeys far more comfortable but there is something about the little Renault’s fizzy engine that will have petrolheads salivating. Nail the throttle and witness the rev needle tickle the 7,000rpm mark before the Twingo complains.

It is clear the Twingo RS is gunning for the stripped-out racer approach to its interior design because there really isn’t much to write home about. It features a small CD/radio unit that surprisingly offers both Bluetooth and USB connectivity, but accessing these functions can be fiddly, especially when on the move. The air conditioning and heater system is delightfully retro, with large white dials operating most functions. A majority of the options on the list consist of styling but the Cup chassis is a must for those wanting to really chuck the Twingo around.

The Swift is slightly more refined, with its interior looking more like a normal family car rather than a track day warrior. Keyless entry comes as standard, as does an ISOFIX child restraint system plus there is all the entertainment gubbins one needs. Both cars lack a sat-nav, which is forgivable in the Twingo, but the Swift could do with one as an optional extra at least. The Swift Sport costs £13,749 while the Twingo Renaultsport can be specced to the hilt. The car pictured here is the ideal package buyers will want and it costs from about £14,000.

As much as the Suzuki Swift is the adept all-rounder, the sensible option and the choice of any sane person, there is something to be said for the Twingo’s old-school charm. The chassis definitely errs on the harsh side but when it comes to a high-speed country lane hoon, the Suzuki finds it difficult to keep up. The Swift Sport’s added weight and less track-focused set-up mean it rides beautifully on longer journeys but doesn’t quite offer the Twingo’s level of driver-engagement. That said, the Swift Sport wouldn’t fail to impress when the need for some enthusiastic driving takes hold and it settles into the role of everyday runaround with real aplomb, but proper performance junkies will be drawn towards the sporty Renault’s overall racier package.

What do we think of them?

This was a particularly tough test, as both cars possess a certain charm. Regardless, the Renault just edges it due to the fact it busts the myth that really small, fun and affordable hot hatches no longer exist. Renault’s RS department has done a stellar job with the Cup chassis and the plucky little engine revs to unbelievable levels, just don’t expect to be completely comfortable on the morning commute.