Hyundai continues to light up Piccadilly 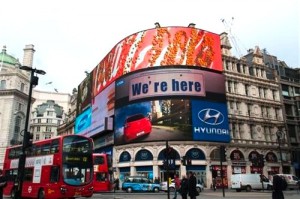 KOREAN firm Hyundai has confirmed it will retain its place on the iconic Piccadilly Lights in central London.

The advertising landmark and tourist hot-spot will display the brand’s advertising until October 2018, helping Hyundai to raise awareness of its brand, following an initial two-year agreement signed in 2011.

Tony Whitehorn, CEO of Hyundai Motor UK, said: ‘We have had a prominent position on the world-famous Piccadilly Lights for nearly two years now. During that time, Hyundai has increased sales and market share in the UK.

‘The new five-year partnership will help further build the Hyundai brand and enable us to share Hyundai imagery and information through one of the most prominent and renowned advertising spaces in the world.’

A recent study into footfall around the lights during core daytime hours found that over a week-long period, an estimated two million people passed the iconic site. Of these, 1.38 million were on foot, increasing their chances of viewing Hyundai’s advertising, raising awareness of the brand.

Whitehorn added: ‘Hyundai’s sales growth in the past few years has been driven by a new generation of vehicles that demonstrate our European focus in terms of design, quality and technology. Now, we want to further raise awareness of the Hyundai brand, and the Piccadilly Lights will play a key role during the next five years in appealing to and engaging with new and existing customers.’