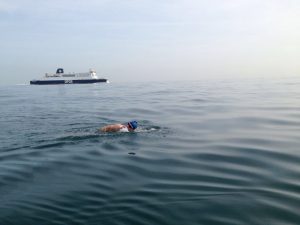 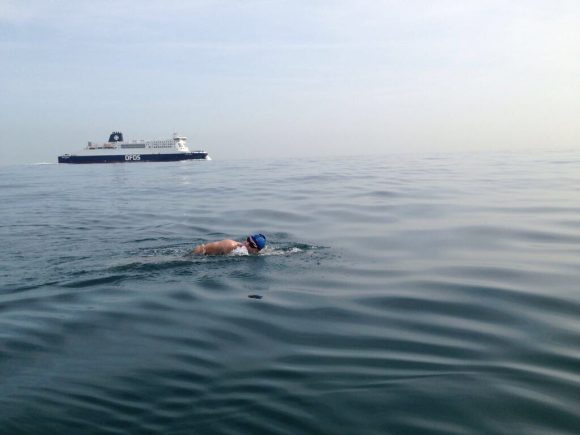 THE JLR cross-Channel charity relay swim has been successfully completed.

Managing director Jeremy Hicks and a team of JLR dealers and employees embarked on the trip to raise £160,000 for the automotive industry charity Ben. The fund currently stands at £120,000.

The swimmers and their two support boats arrived on the other side of the Channel about 3pm today.

On the Just Giving web page set up for the event, Hicks wrote: ‘I am challenging myself, my team of 13, and also the industry to get behind our own dedicated industry charity, Ben. Without our support, Ben couldn’t continue to provide much-needed services to our colleagues. To support this great cause, our team is taking to the water.

‘Whilst preparing for the swim it was with great sadness that we learned of the passing of two very special women passionate about our industry: Ruth Woolcock, the beloved wife of Ben’s chairman Robin Woolcock and Deidre Clark, the cherished mother of Chris Clark, one of our swim team members. Therefore we would like to dedicate the swim, and our endeavours to their memory. They will both be in all our thoughts as we tackle the channel in August.

‘The English Channel takes swimmers anything from seven and 27 hours to complete. As one of the busiest and most hazardous shipping lanes in the world, the Channel will be a cold and choppy challenge. But as a team, and with your support, we’ll make it.’

Coincidentally, today is the 142nd anniversary of the first known successful swim across the Channel. It was achieved in 1875 by merchant navy captain Matthew Webb in 21 hours and 45 minutes.

The swim is being done for the charity’s Industry Leader Challenge, which in its inaugural year last year saw Marshall Motor Holdings chief executive Daksh Gupta perform a tandem skydive that raised more than £150,000.

Speaking to Car Dealer earlier this month, Hicks added: ‘Our crossing time depends on the tide – but we’ve got around 18 hours in our heads as a total completion time. The record is under 10 hours, and it can take up to 30 – though the longer ones tend to be solo swims.

‘If you hit the tides wrong, you could potentially be on an ebbing tide for six hours – this would leave you swimming solidly for six hours but not travelling any distance. It’s all a real mind test.’

The swimmers arrived in France at 3pm today, with the news announced via the tweet you see in the early part of this story. Huge congratulations from everyone at Car Dealer!

MORE: JLR MD and dealers to take the plunge for charity Channel swim

On SuperUnleaded.com: What you need to know about the new BMW M5