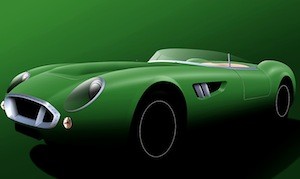 TWO well-known figures in the automotive business have joined forces to create a new car.

Ant-Kahn is a partnership between Afzal Kahn, founder of the Kahn group of companies, and Ant Anstead, creator of expert vehicle manufacturer Evanta, and star of Channel 4’s ‘For The Love of Cars’.

Their new car will be a two-seater barchetta that takes design cues from classic two-seaters from the 1950s, most notably the Aston Martin DB3S and DBR1 racing cars.

‘We are already working on exciting future plans that extend from coach-built special editions to series manufacture of motor vehicles, and you will see a number of models come to fruition in the coming weeks and months,’ explained Afzal Kahn.

Ant Anstead added: ‘Together, we are dedicated to continuing and building upon the historical excellence of British vehicle manufacture and the traditions of hand finished coach building are at the heart of the company’s ethos.’

The barchetta will get its first public unveiling at the Goodwood Revival in September and will be just one of a raft of new cars built under the Ant-Kahn banner.

The two-seater will be joined by the ‘Flying Huntsman’ – a ‘new take’ on the Land Rover Defender – and a restyled Aston Martin model.