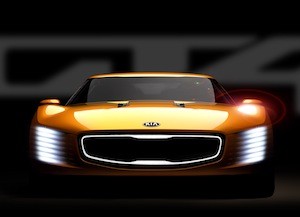 The GT4 Stinger was designed at Kia’s American Design Center in California and is clearly one of the more extreme cars to head to the show.

It sports the latest version of the brand’s signature ‘Tiger Nose’ grille and features front-brake cooling vents which funnel air around its 20-inch wheels.

Its carbon fibre front splitter mounted below the bumper provides extra downforce, which is essential with a 2.0-litre turbocharged unit under the bonnet sending 315bhp to the rear wheels.

Kia also told Car Dealer that a production version of its 2011 GT concept car is likely to go on sale in two years time.