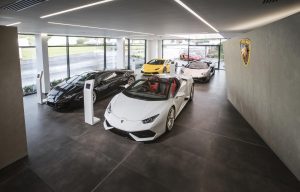 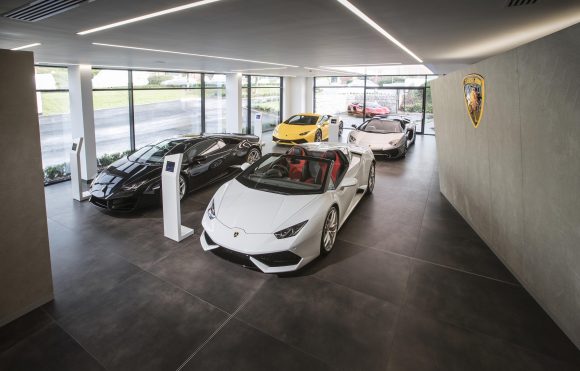 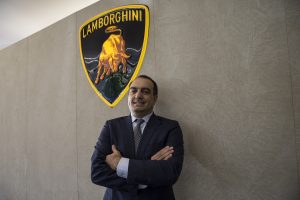 LAMBORGHINI Bristol has become the first showroom in the world to receive the brand’s new corporate identity.

The dealership, which is part of Rybrook Specialist Cars, opened officially yesterday (September 22, 2016) and takes the number of Lamborghini outlets in the UK to eight.

Lamborghini is going through a transitional period. Traditionally the brand has only made supercars with little consideration for practicality. The business is now in the late stages of developing its performance SUV, with which it aims to offer a car equipped for everyday life.

Lamborghini commercial director Federico Foschini, who attended the Bristol branch’s launch event, explained: ‘We decided a couple of years ago that now was the time to change to create an identity that was easier to involve people in the Lamborghini brand. We’re moving to a purer, more cutting-edge and visionary design.

‘This is something we’d like to have in order to involve as many people as possible around Lamborghini. Not only customers, but fans and other people who are interested.

‘The next model evolution will be the SUV. In terms of body type it’s a car that should appeal to a larger customer base. It’s a car that’s not only beautiful but a car for daily use, a car that gives you a lot of emotion but can be used with a family or for a daily job. With this we really want to enlarge our customer base.’

The look of Lamborghini’s retail outlets now has a softer and more welcoming appeal. Designers have still included the angular lines, reflected from the cars’ striking design, but moved away from the bright colours and used natural materials such as stone and suede.

‘Lamborghini itself is very exclusive, but the brand should reach as many people as possible,’ Foschini added. ‘We want to have children and young people inside the showroom, we want them to have fun. It’s about having a brand that’s more inclusive and inviting.’

Lamborghini Bristol was chosen as the first to receive this new-look, partly because of timing, as one of the latest dealerships to open, but also because of the importance of the UK market to the supercar brand.

‘The UK is one of the most important markets to us. Last year we did 253 cars, this year to August we have already done 256. At least eight per cent of the market will be covered by the UK this year and we’re going to hit 3,400 cars. At the end of the day it’s between the third and fourth market for us.’

With the Italian brand enjoying more demand than output, it’s not too worried about the effect of Britain leaving the European Union in the short term. But it is looking to capitalise on it as it aims to increase its sales here in the UK.

MORE: Volkswagen commits to repair all dieselgate cars by autumn 2017