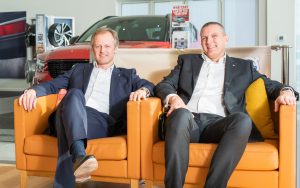 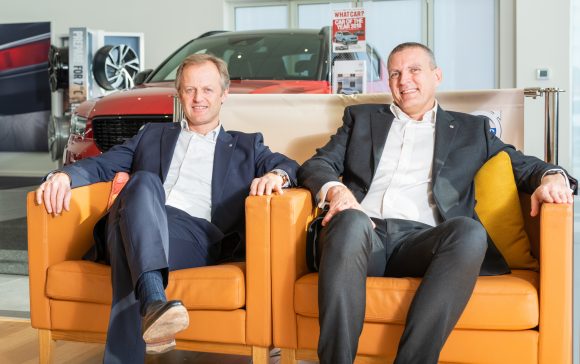 Adrian Wallington, previously with the listed dealer group for seven years, will rejoin Marshall as commercial development director from Endeavour.

He has been tasked with finding ‘further growth opportunities’ and leading some ‘strategic projects’ for the group (he is pictured in the main image on the right).

Simon Elliot joins as director of commercial vehicles – pinched from listed dealer group rivals Vertu – while the in-house legal team has been bolstered by the addition of Caroline Illing and Matt Willmott.

The latter are a sign Marshall’s acquisitive nature is on the rise as the move to bring the pair in house will save legal costs on future acquisitions.

Willmott joins the group from the firm’s legal advisors Denton LLP and has acted on behalf of the group since 2011 on its acquisitions and its IPO in 2015.

Illing previously worked for Marshall and will work on the group’s ‘growth agenda’.

Chief executive Daksh Gupta said: ‘At a time when many in the industry are making redundancies, Marshall is making positive investments for our future.

‘These appointments underscore the group’s ambitions to its growth strategy and investment in these key roles will enable this to happen. All existing roles, reporting lines, responsibilities and accountabilities are unaffected.

‘These high calibre individuals have been added to support the future growth aspirations of the business, support our outstanding management teams and enhance our existing operations.’

Elliot’s appointment to head up Marshall’s commercial arm will help the group grow its CV sales – an area highlighted for growth by the company.

Marshall said: ‘Simon’s role will be to support the group’s operational directors in exploiting the opportunities that the commercial vehicle sector has to offer and specifically, to grow the Group’s commercial vehicle exposure, footprint and channels to market.’