People who come into close contact with a coronavirus sufferer will be told to self-isolate for 14 days as the government launches its tracing system today.

NHS Test and Trace – seen as key to easing the restrictions – will see anyone with coronavirus symptoms immediately self-isolate and book a test. Their household should start a 14-day isolation period and if the test proves negative, everyone comes out of isolation.

But if the test is positive, NHS contact tracers will call, email or send a text asking them to share details of the people they have been in close contact with and places they have visited. They will then be contacted and told to carry out the same procedure.

One million UK businesses have claimed £15bn from the government’s Coronavirus Job Retention Scheme to cover the wages of 8.4m staff unable to work during lockdown, new official figures show.

The Treasury also revealed yesterday that UK banks have funnelled more than £27bn to companies as part of three state-backed loan schemes since Covid-19 shut down large parts of the economy.

Meanwhile, HMRC said more than £6.8bn has been claimed via 2.3m applications from those who are self-employed and unable to work.

Sturgeon to reveal if Scotland will ease lockdown

Nicola Sturgeon is expected to announce ‘cautious’ steps out of lockdown for Scotland today.

The First Minister will reveal if the country is moving on to the first phase of a four-part plan for easing the restrictions – which could come into effect tomorrow.

People could be permitted to meet up with friends or relatives from other households – one household at a time – and take part in some non-contact sports such as golf, angling and outdoor swimming. Garden centres, drive-through restaurants and recycling centres could also get the green light to reopen.

Rolls-Royce now sells a 1:8 scale replica of the Cullinan that owners of the real thing can have in the exact specification of their full-size SUV.

The British firm says every detail of the real car has been ‘reproduced with absolute perfection’ and ‘painstakingly crafted by hand’. Each model has 1,000 individual parts and takes 450 man-hours to build – more than half the time it takes to build the real thing.

The display case for the replica is almost one metre long and is mounted on a plinth to be put on display. There’s no word on price, but we’ll give you a clue: It’s probably a lot.

Renault has revealed more information about its Clio and Captur E-Tech hybrid models which arrive in September.

The Clio is a traditional hybrid which generates charge from the engine for use at low speeds. The Captur hybrid can be plugged into the mains to add charge.

Though the pair both use a 1.6-litre petrol engine combined with two electric motors, the Captur (from £30,495) is the only one that can be locked into electric mode, while Renault states the Clio (from £19,595) can operate in EV mode for ‘around 80 per cent of the time’ at speeds of up to 38mph.

Classic car fans opting for new wheels instead of holidays

Classic car fans are planning to treat themselves to a new car instead of a dream holiday, according to a new survey – and the Ford Capri is top of the list.

New research by Car & Classic found that 93 per cent of 2,000 respondents were planning to shell out for a dream classic car instead of a holiday this year.

And with users flocking to classifieds during the lockdown – 3.6m visited Car & Classic’s site in April alone – it would appear that many people are choosing to research their next vehicle instead of browsing holidays. Popular models included the MG B GT, Triumph Stag and Rover P6.

UK gadget owners are being encouraged to donate devices they no longer need to help those lacking connectivity during lockdown.

The Great British Tech Appeal has been launched by Vodafone and charity Barnardo’s in an effort to help those without adequate digital access to online education and other services.

The appeal warns that thousands of people – particularly children – are unable to access technology. It hopes to redistribute devices to around 10,000 disadvantaged children, families and charity workers who support them.

Four out of five Ryanair passengers still waiting for refunds

Four out of five Ryanair passengers who requested a refund after their flight was cancelled during the pandemic are still waiting for a pay-out, a survey has suggested.

Some 84 per cent have not had their money returned and only five per cent received a refund within the legal time limit for EU carriers of seven days, the poll by consumer group Which? indicated.

Ryanair said in a statement that customers ‘will be refunded in due course, once this unprecedented crisis is over’.

The boss of BP has said the global lockdown has given people ‘a look’ at a greener future, as air pollution drops in many major cities around the world.

Bernard Looney, who promised to make his company emissions neutral shortly after taking over in February, said people have been given ‘a look at what a different path might look like’, pointing at ‘clear skies, cleaner areas and cities’.

However the Irishman refused to provide any real detail on what he will do to transform one of the world’s biggest oil companies, telling shareholders at the AGM they must wait until September to get the details of his plans. 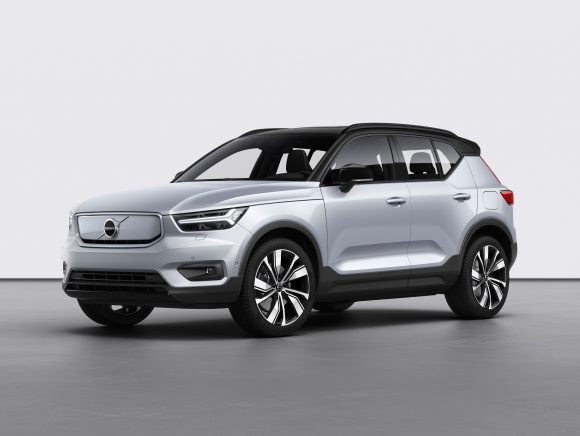 Electric XC40 Recharge goes on sale in the UK

Order books for Volvo’s first electric vehicle have opened in the UK, with the XC40 Recharge priced from £53,155.

Badged P8 to differentiate it from the plug-in hybrid Recharge model, it has a range of 249 miles and can be charged to 80 per cent of its battery capacity within 40 minutes at a fast charger. It makes 402bhp and has a 0-60mph time of 4.9 seconds.

At first, it will only be offered in R-Design specification, which includes 19-inch alloy wheels, leather and nubuck upholstery, aluminium inlays, 12-inch driver display, high-end audio system and LED headlights.

The FTSE 100 delivered another ‘solid’ performance as it closed in the green yesterday despite tempering trading sentiment towards the end of the day.

It was once again bolstered by improving travel and retail firms, which remained optimistic about plans to loosen current lockdown restrictions.

John Lewis has said it will reopen its first two department stores on June 15 with new social distancing measures in place to protect shoppers and staff.

The retailer said it will then reopen a further 11 stores on June 18 as part of a phased reopening plan to welcome customers to its shops again.

It said it plans to reopen more stores ‘throughout the summer’ depending on how customers and staff respond to the first openings. John Lewis’ stores in Poole and Kingston will be the first to open.

Two thirds of pub jobs could be lost unless social distancing restrictions are reduced to one metre, the industry is warning.

Ministers were also urged to maintain the furlough scheme at the current rate of paying 80 per cent of wages until October after the government signalled it will ask companies to start sharing the cost from August.

In a letter to Chancellor Rishi Sunak, the The British Beer & Pub Association (BBPA), British Institute of Innkeeping (BII) and UKHospitality (UKH) called for furlough salary for pub and hospitality staff to be maintained at 80 per cent until October.

Fewer than half of retail tenants paid rent in March

One of the UK’s biggest commercial landlords has revealed that more than half of its retail tenants failed to pay rent in March.

However, nearly all of the company’s office tenants did stump up. British Land, which owns shopping centres including Meadowhall in Sheffield and office buildings in London, said the hit to big high street names from the lockdown was likely to shift shoppers online even faster.

The crisis means the company has written down the value of its retail empire by a quarter to £3.9bn, pulling the entire portfolio down by 10 per cent to £11.2bn.

McDonald’s to reopen more than 1,000 restaurants by next week

McDonald’s is rapidly expanding its store openings across the UK and Ireland to have more than 1,000 restaurants reopened for drive-thru or delivery by next Thursday.

Last week, the fast food chain reopened 33 drive-thru sites but the company said it decided to close some lanes where demand ‘impacted local communities or the safety of our people or customers’ due to long queues.

The company said every drive-thru in the UK and Ireland will be reopened between Tuesday and Thursday of next week.

Some key stories you might have missed on CarDealerMagazine.co.uk yesterday: