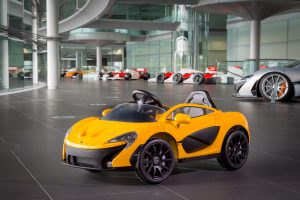 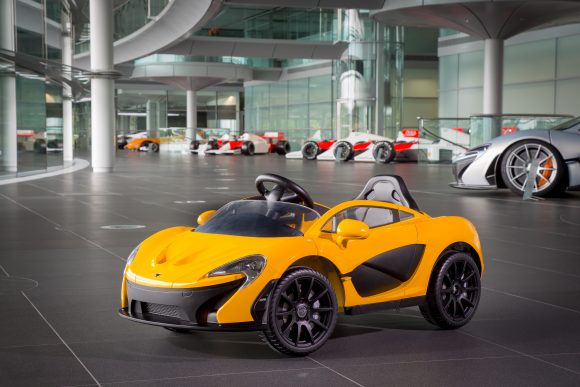 MCLAREN has unveiled its latest product ahead of this week’s motor show, its most lightweight car yet and it’s pure electric.

For the first time the P1 has lost its roof and it’s been given a central driving position, as seen in the iconic F1. The only downside is it’s really designed for those under the age of six.

Attention to detail in the tiny replica is incredible. The miniature P1 includes many of the stylistic elements you would expect to see in the actual car. This includes the dihedral doors that open like wings, those recognisable lights, McLaren wheels and bodywork details where you would traditionally expect to find the engine.

It starts with a one-button stop/start function that automatically activates the lights and ‘air-conditioning’ unit. The car is fitted as standard with an MP3 player and audio system that has been helpfully pre-programmed with every popular nursery rhyme.

The electric engine will take the car from zero to its top speed of three miles per hour in only two seconds. It also features a reverse gear in addition to its three-speed, forward transmission.

The Ride-On electric McLaren P1 is the first officially licensed product from McLaren Automotive to enter this growing segment and is the most compact car yet to wear the McLaren badge. Ideally, buyers should be between three and six years old, although young drivers beyond this age group might also fit.

It will be available from the end of October, first from selected McLaren Automotive retailers around the world priced at £375, followed by recognised global toy retailers.

MORE: How dealers can build trust with their customers, by Dragon2000