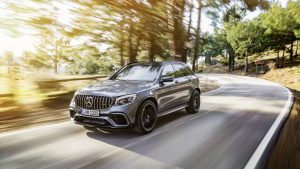 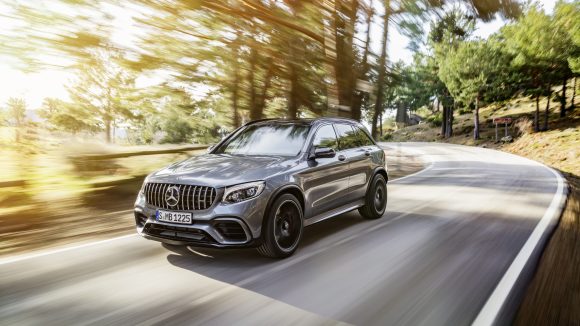 MERCEDES-AMG has revealed two new performance SUVs, the GLC 63 4MATIC+ and GLC 63 4MATIC+ Coupé – cars it promises will be ‘as good on the road as they will on the race track’.

Unique in their segment thanks to the eight-cylinder biturbo engines that sit under the bonnets, the SUV and Coupé will be available in both basic and S-model variants.

Thanks to added turbocharger boost pressure, the S-Variant models will offer 503bhp and 700Nm of torque. Acceleration figures are not yet released, but both are electronically limited to 155mph.

Mercedes reveal the new AMG GLC 63S Coupe ahead of the New York Motor show. 0-60mph in 3.9 seconds – for an SUV… pic.twitter.com/SP4nB6Hhgr

AMG boss Tobias Moers unveiled the cars ahead of their debut at the New York Motor Show on Wednesday.

He said: ‘It’s hard to believe that AMG was a rookie in the midsize SUV segment only a year ago. But wherever we compete we want to be top dog. Our GLC 63 and GLC 63 Coupé step up to become leaders of the pack. They will be super-sportive cars with excellent everyday usability that is equally at home on the race track.’

This powertrain is coupled to a nine-speed transmission, which made its debut in the Mercedes-AMG E 63 4MATIC+, while AMG Performance 4MATIC+ all-wheel drive with fully variable torque distribution, a rear-axle limited-slip differential and a high-performance braking system also feature.

Mercedes-AMG’s Dynamic Select system offers four driving modes comprising of Comfort, Eco, Sport and Sport Plus in the standard model, while the S-Variant will also feature a Race mode.

Styling-wise, the new models boast the AMG Panamericana grille, which has previously been reserved for the AMG GT family. Wider wheel arch claddings at front and rear lend emphasis to the muscular looks, while new side sill panels make the SUV and Coupé appear to sit lower on the road while elongating the overall lines.

In the cabin, the performance-focused appearance continues. Sports seats are standard for the driver and passenger, while the Artico leather-clad instrument panel features a host of AMG-specific controls. The S-model variant adds a Performance steering wheel, AMG badges in the front head restraints and an AMG instrument cluster with red highlights.

The cars are likely to start from around £68,000 when they arrive here in September but official prices are yet to be released.

MORE: Win a fantastic Easter prize if you sign up for ‘CD-Eggs’!

On SuperUnleaded.com: Ferrari 488 GT3 gets wrecked in crash at Nurburgring