Home > News > More MG dealerships popping up in the midlands 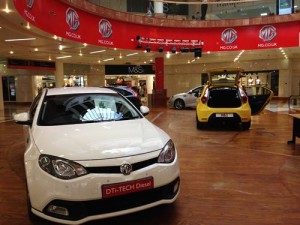 More MG dealerships popping up in the midlands

MIDLANDS-based manufacturer MG is pushing ahead with the pop-up dealership initiative it has launched on its home turf.

The additional pop-ups follow on from the success of the flagship pop-up dealership in Westfield Merry Hill, which has now been running for nearly a year.

The expansion to the pop-up dealership network follows dramatic growth for the manufacturer’s main dealer and aftersales network – with 50 dealers and 13 aftersales centres now appointed within the UK.

All three pop-up displays will feature the new MG3 and the award winning MG6; available in both GT fastback and Magnette sports saloon variants. The displays will allow prospective customers to see the product line-up in the flesh and talk to MG sales executives.

MG has once again topped the list for growth within the automotive industry. The firm has been named the fastest-growing automotive brand in the UK by the SMMT every month so far in 2014, the iconic marque’s 90th anniversary year.

Around 50 per cent of UK households are now within a 30-minute drive of an MG dealer. The company hopes to have 100 retailers on board by the end of 2015.