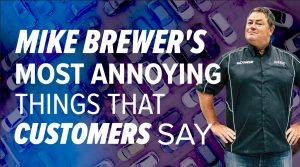 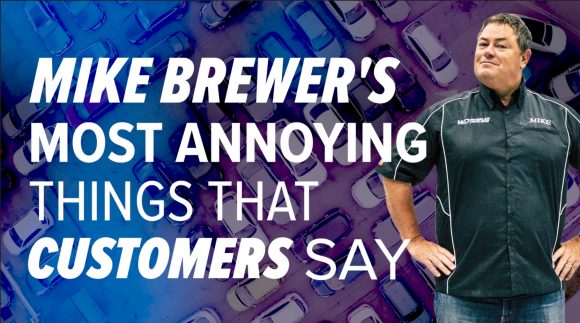 Wheeler Dealer star and Used Car Awards host Mike Brewer not only knows how to do up a second hand car – he also knows how to sell them too.

With the deadline approaching for nominations for our Used Car Awards – nominations for which can be done here – we’ve asked Brewer to have a think about the stupid things used car customers say.

In this exclusive video, Brewer rounds up the phrases that really get dealers’ goats.

They say the customer is always right – and in most cases they usually are – but that’s to say every now and again used car dealers across the world hear some pretty stupid things.

While used car buyers might think they’re being smart, there are some words and phrases that are guaranteed to cheese off a car dealer faster than you can say ‘does it come with a free tank of fuel’.

I’ve heard them all and while you might think it will show the car dealer you know what you’re talking about, the chances are it probably will have the opposite effect.

So in the interests of doing the world a favour, I thought I’d round up the ones that car dealers won’t love to hear.

Remember, if you want a decent deal on a used car you’re far better off being honest, frank and up front about what you want and why.

Don’t try and bamboozle the car dealer with your expert ‘knowledge’, instead just explain why you want the car and what they need to do to make you buy it. Cards on the table work far better than trying to pull the wool over a dealer’s eyes.

Oh, and try and avoid saying anything stupid – like these:

‘My brother’s a mechanic’

Replace brother with mate / uncle / sister / bloke I drink with down the pub – I’ve heard them all.

Bringing a mechanic mate along with you to check the car over is all very well and probably rather sensible, but using the threat of one as a way to get the price down is a sure fire way to get a dealer’s back up.

‘Any chance of a trade price?’

Unless you’re in the motor trade – and the fact you’ve found the car you’re looking at via the usual advertising methods is a good indicator that you’re not – don’t ask for a ‘trade deal’.

Ask yourself why a dealer would sell you a car at the same price they bought it for? What would be the point in even being in business?

Customers need to realise that dealers are running a business – profit is not a dirty word, it makes the world go round. Which brings me to…

Are you flipping these cars for a profit?

After you’ve walked past the reception area, the free coffee machine and taken a seat in the smart office chairs, do you really need to ask the salesman if they’re trying to make a profit?

It staggers me how many people walk into a car dealership and expect it to be a charity. Time and effort sourcing good quality cars and preparing them should be rewarded.

Dealers are in this game to make money, the same reason you get up and go to work – so don’t be surprised that they’re attempting to put food on the table by making a margin on selling used cars.

Do you take Paypal?

Look, now I know more and more car sales are going online, but turning up at a car dealership and expecting to pay them i full via Paypal is likely to have you laughed out of the showroom.

Why? Well you’re expecting to drive away in a car worth thousands of pounds, it’s not too much to expect to be paid, in full, by a traditional bank or finance company.

Paypal is getting more popular but only really for deposits – full payments need to be made in more normal ways.

Parker’s tells me my car is worth this…

While it’s a good idea to have an idea what your car is worth, it’s really up to the dealer what he wants to buy it for.

Demanding silly money for your car because used car valuations experts X, Y or Z have told you something isn’t a good way to start off.

You’re better telling the dealer I need £X for my car to make this deal work and they’ll soon tell you whether they can do it or not.

If you start telling them Parker’s or similar has told you it’s worth something, chances are they’ll tell you to go and try and sell it to them instead…

Look, I know car buying can be complicated and a little intimidating – but if you go into a dealership all guns blazing, demanding this and that you’ll get the cold shoulder.

Go in with a humble attitude that’s fair but firm and I guarantee you that you’ll get a good deal.

Our Used Car Award winners are dealers who do just that so if you know of a good one get nominating now.

Nominations close on Friday, October 30, and we’ll be revealing the winners in a special video ceremony on this website on December 16.