From the beautiful 356 to countless ultra-successful racing cars – and, of course, the 911 – the story of Porsche takes in a long list of mega motors that inspire loyalty and enthusiasm from fans across the globe.

I’ve always been fascinated by the lively history of Porsche, from its pre-Second World War days of vehicle design to its post-war arrival as a sports car specialist.

The company’s story starts with Ferdinand Porsche – a clever chap and gifted engineer who was born in what is now the Czech Republic. His first flirtations with car production were at the Austrian Jakob Lohner & Co factory, which had been best known for building coaches for royals.

Porsche joined to build the electric ‘Mixte Hybrid’ of 1901, which was powered by a Daimler internal combustion engine and electric motors. He was then recruited by Austro-Daimler in 1906 to be its chief designer, leaving in 1923 and hired soon after by the firm that would become Daimler-Benz.

A stint at Steyr Automobile, which he joined in 1929, ended in redundancy because of the Great Depression, and Porsche opened a consulting firm in Stuttgart for vehicles and engines in 1931, working on Nazi tanks and the ‘people’s car’ that went on to become the Volkswagen Beetle.

What made it famous?

After the war, Porsche set about building his own car – the 356. Built on a tubular chassis, the early models shared a lot of mechanicals with the VW Beetle, but the design gradually distanced itself from its Love Bug brother as the years went on.

Of course, the 911 would be the real moment of truth for Porsche. It arrived in 1963
and was briefly known as the 901 before receiving its now-legendary permanent moniker. The 911 proved to be one of the defining sports cars of the decade following its launch, cementing the status of both
model and marque.

Even before the 911, Porsche’s roots in motorsport were being exploited. He had helped
design innovative pre-war Grand Prix cars for Auto Union and so once he had his own manufacturer to play with he went racing.

Porsche focused on the motor racing arena, with Le Mans the crown jewel of that scene. An overall victory wouldn’t come until 1970, but since then it has now won the famous event 19 times. I imagine it isn’t too sore about the wait…

Thanks to the iconic 911 and a motorsport pedigree good enough to define any brand on the planet, Porsche is one of the industry’s leading performance manufacturers.

From the ’50s through to the mid-1970s, it seemed as though Porsche could do no wrong. However, with 911 sales becoming less impressive, the decision was made to replace the iconic model with the front-engined 928.

This caused many fans to turn their noses up and forced Porsche to continue making the classic 911, before eventually biting the bullet and developing the 964 at the tail end of the ’80s.

It wasn’t just a seeming desire to move away from its roots that gave Porsche grief; a costly set of financial faux pas from briefly appointed chief executive Arno Bohn landed the company in some monetary strife, but ultimately the brand would survive, in no small part thanks to the Cayenne and Boxster – two cars whose affordability and usability opened up Porsche’s market to a wider audience. These days Porsche makes more SUVs than it does sports cars, but thankfully the latter are still core to the brand’s ethos. 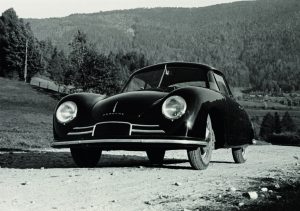 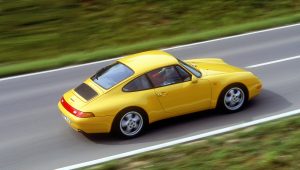 In the eyes of many, including my own, this is the definitive 911. By the ’90s, the world of car design was changing at a sprint, but somehow Porsche managed to produce an air-cooled 911 that firmly held on to its roots yet still felt cutting-edge. As the last of the air-cooled 911s, the 993 is a purist’s dream car that served as the basis for countless variants that are now greatly sought after. 993 versions of the Carrera RS, Turbo and its race-derived brother the GT2 are all considered classics today. In 2017, a 993 GT2 went on sale for just shy of two million dollars – if you see one of those on the roads, it’s safe to bet that the driver has some dosh! 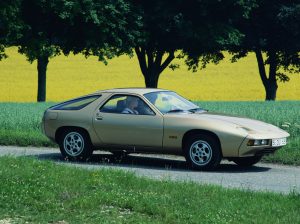 Porsche attempted to phase the 911 out in 1977 with the 928, but the front-engined, V8-powered model had a tough job on its hands. With an advanced V8 engine out front, the coupe grand tourer was impressive, but a hefty price tag and resistance from the 911 faithful meant it struggled. It survived until 1995 and is a great car – but oddly would probably have done better without a Porsche badge, as the 911 snobs hated it. With decent examples available for less than £30k, I think the 928 is a car that’ll soon appreciate! 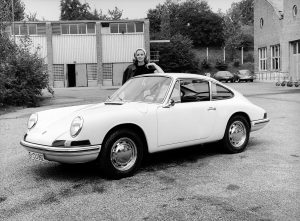 Just look at this thing! Back in 1963, the 901 made its debut that – after some noise from Peugeot, which used the same numbering scheme – became the 911. This was the car that cemented Porsche’s reputation for years to come, with its rear-engined layout and flat-six engine both becoming the expected hallmarks of any Porsche. The original ‘Classic’ 911 evolved over its lifetime, with models such as the legendary 2.7 Carrera RS and the first Turbos putting the car’s already venerable architecture to the test in the ’70s. These days, there are more million-dollar air-cooled 911s selling at auction than you can shake a stick at! 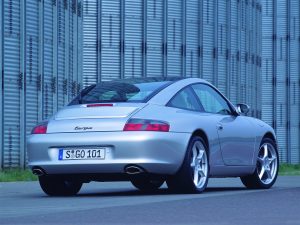 The 911 went through its biggest ever change at the end of the ’90s, receiving an entirely new body shape and a water-cooled engine – the 996 was a big switch of ethos. The formula was different but the car still possessed all the prowess of those that came before, which was further highlighted by sporty models such as the GT2 and the first GT3 track special. While the car was derided by some 911 purists, who have shunned it for years, appreciation of this model is going up, along with values. I’d suggest you dive in now and bag a decent one.

How much are they are now? Click here to find out 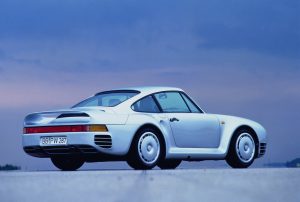 With its roots as a car design consultancy firm and Ferdinand Porsche’s penchant for innovation, technological advancement has always been important to the brand. One of the better embodiments of that is the 959. This hyper-911 was a 444bhp, all-wheel-drive tour de force that was greeted with fanfare from the motoring press. They were questionable from a business perspective, though. In 1987, you could buy one in the USA for $225,000, which was half of what it cost Porsche to build each one. Just 337 of these cars were made between 1986 and 1988, with a run of eight built from spares in 1992. Some 29 of the original-run cars were ‘Sport’ versions that could hit 211mph thanks to a significant power hike. 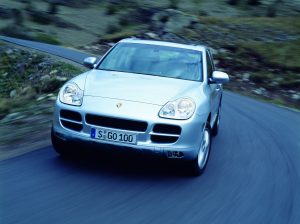 Porsche debuted its first SUV, the Cayenne, in 2003. To many enthusiasts, this was completely against everything Porsche stood for. However, between the Cayenne and the Boxster, Porsche managed to open up countless new streams of customers, giving it a massive boost in sales and finances. By the end of the decade, the long-standing relationship between Volkswagen and Porsche came to a head, with Porsche now a firm part of the VW Group umbrella alongside the likes of Audi and Lamborghini. This has led to further new ventures for Porsche, such as the smaller Macan SUV.

How much are they are now? Click here to find out 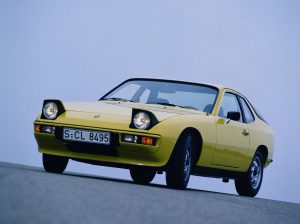 In 1976, something of a head-turner – for better or worse – rolled off the production line. The 924, Porsche’s first front-engined sports car, was born. This car, with an engine sourced from Volkswagen that also saw use in a van, was derided by purists, although thanks to its bottom-of-the-range pricing, it did sell rather well. 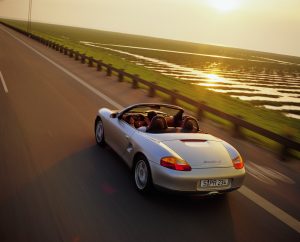 When the first Boxster arrived in 1996, it seemed as if the manufacturer had finally found the right formula for a budget Porsche, after the successful but unauthentic 924. With a proper flat-six boxer engine in the mid-rear and styling that aped the upcoming 996, it was a proper mini Porsche. The Boxster has evolved considerably over the

years, most notably with the introduction of the hard-top Cayman, but from
its very earliest days it was clear
that Porsche was on to a winner. The Boxster has been a huge sales success, making the brand more accessible, and helped save the firm after a financially tumultuous late-1980s. 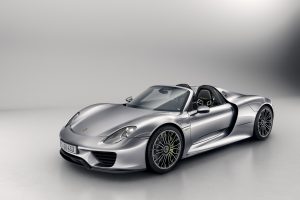 In 2013, the 918 Spyder went into production and the plug-in hybrid was a landmark in Porsche’s electric ambitions. The car’s internal combustion engine was based on one from the Porsche RS Spyder and used a hybrid system that was built using knowledge from motorsport – giving it a heady 885bhp. With just 918 units made, there can be no question that these will appreciate on the used market for years to come. When I searched the internet while writing this, there was a 918 on sale for less than £1.2m, and I’m sure that’s just the start of their ascent! 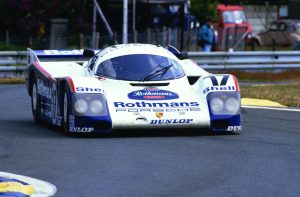 Debuting in 1982, the Porsche 956/962 series was the defining Le Mans car of the decade and the ultimate Group C racer. The 956 was the European market car, with the 962 designed to comply with the subtly different US rules of the time. The 956 won Le Mans on its first try in 1982 and won every year of the race until 1985. The 962 won Le Mans in 1986 and 1987 and continued to be successful in privateer hands in the ’90s in the World Sportscar Championship and national-level series. 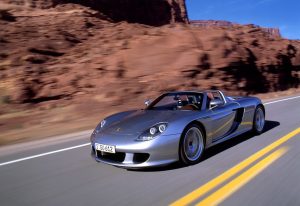 Porsche was making a significant set of changes in the 2000s – so much so that a spectacular V10 supercar, the Carrera GT, felt like the least surprising car in its range at the time! This incredible machine sourced its engine from an unraced Le Mans car. Even then, the engine was developed from an early ’90s Porsche F1 engine, so it’s safe to say it has some serious racing credentials! Producing almost 603bhp, propelling 1,380kg of car, the Carrera GT could hit 208mph.